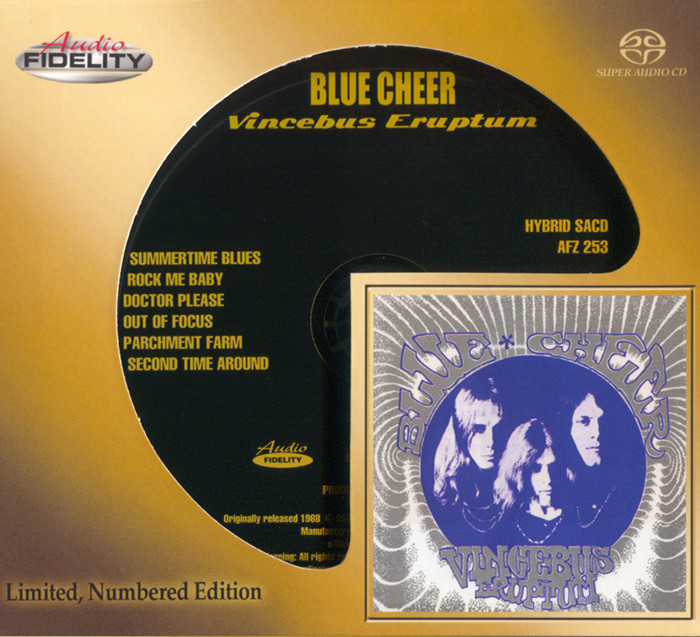 Vincebus Eruptum is the debut studio album by American rock band Blue Cheer. The album features a heavy-thunderous blues sound, which would later be known as heavy metal. It also contains elements of acid rock, grunge, experimental rock, blues rock, stoner rock, and garage rock. A commercial and critical success, Vincebus Eruptum peaked at number 11 on the Billboard 200 albums chart and spawned the top-20 hit cover of Eddie Cochran’s “Summertime Blues”. Being an example of hard rock, it is also lauded as one of the first heavy metal albums. Online music service Rhapsody included Vincebus Eruptum in its list of the “10 Essential Proto-Metal Albums”, suggesting that the band “not only inspired the term ‘power trio,’ they practically invented heavy metal”.

Rock & roll had grown louder and wilder by leaps and bounds during the ’60s, but when Blue Cheer emerged from San Francisco onto the national rock scene in 1968 with their debut album, Vincebus Eruptum, they crossed a line which most musicians and fans hadn’t even thought to draw yet. Vincebus Eruptum sounds monolithically loud and primal today, but it must have seemed like some sort of frontal assault upon first release; Blue Cheer are often cited as the first genuine heavy metal band, but that in itself doesn’t quite sum up the true impact of this music, which even at a low volume sounds crushingly forceful. Though Blue Cheer’s songs were primarily rooted in the blues, what set them apart from blues-rock progenitors such as the Rolling Stones and the Yardbirds was the massive physical force of their musical attack. Jimi Hendrix, the Who, and the MC5 may have anticipated the sound and fury of this music, but Blue Cheer’s secret was not just being louder than anyone else, but staying simple enough to give each member the space to do damage both as individuals and as a group. Paul Whaley’s drumming combined a crashing dustbin tone with a constant, rolling pummel that suggested Ginger Baker with less finesse and more bludgeoning velocity. Dickie Peterson’s basslines were as thick as tar and bubbled like primordial ooze as he bellowed out his lyrics with a fire and attitude that compensated for his lack of vocal range. And guitarist Leigh Stephens may have been the first genius of noise rock; Lester Bangs once wrote that Stephens’ “sub-sub-sub-sub-Hendrix guitar overdubs stumbled around each other so ineptly they verged on a truly bracing atonality,” and though that doesn’t sound like a compliment, the lumbering chaos of his roaring, feedback-laden leads birthed a more glorious monster than many more skillful players could conjure. Put them together, and Blue Cheer’s primal din was an ideal corrective for anyone who wondered if full-on rock & roll was going to have a place in the psychedelic revolution. From the opening rampage through Eddie Cochran’s “Summertime Blues” (which miraculously became a hit single), to the final one-two punch of “Parchment Farm” and “Second Time Around,” Vincebus Eruptum is a glorious celebration of rock & roll primitivism run through enough Marshall amps to deafen an army; only a few of Blue Cheer’s peers could come up with anything remotely this heavy (the MC5’s Kick Out the Jams and side two of the Velvet Underground’s White Light/White Heat were its closest rivals back in the day), and no one could summon so much thunder with just three people. If you want to wake the neighbors, this is still the album to get, and it was Blue Cheer’s simplest and most forceful musical statement.

Note:
Mastered for this SACD by Kevin Gray at Cohearent Audio.
Authoring by Stephen Marsh at Marsh Mastering.