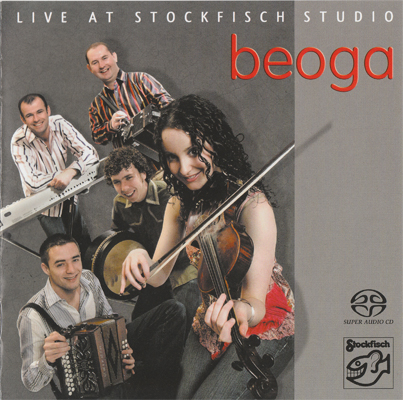 When Beoga (Irish word for lively) formed their ensemble in 2002, traditional Irish music was rocked onto its heels. Combining Celtic based contexts with furious infusions of jazz, folk and vigorous swing, the band assimilated into the world music culture with bravado. The release of their debut album, A Lovely Place, garnered both critical and popular acclaim. The core group of Liam Bradley, Eammon Murray, Damian McKee and Sean Og Graham, was expanded in 2005 with the addition of Niamh Dunne. A second album, Mischief, catapulted the group to stardom. Television and radio concerts globalized their fame. Their youthful exuberance and incendiary nature of their music have created a devoted fan base and worldwide respect.

Live At Stockfish Studio is a riveting, eloquent, thirteen song performance. While steeped in traditional music, this group shatters any preconceived notions. The set opens with “Trolleyed”, as a fast paced accordion opening leads into a jazzy swing romp. Piano (Liam Bradley), guitar and fiddle join in unison with tempo accents and stops. The utilization of dual button accordions (Damian McKee, Sean Og Graham) is scintillating on “Boxy Set”, unleashing a rhythmic tempest against the steady bodhran percussion. The band is extremely cohesive. On “The Prelude Polkas” they soar through an assortment of tempos and jazzy nuances. A change of pace like “The Solid Man” shows a layered, acoustic resonance, highlighted by lyrical entwinement of guitar and violin.

The aesthetics are enhanced by the ethereal vocals of Niamh Dunne. “Factory Girl”, a traditional American piece, is set in motion with a nimble introduction by Graham’s guitar, seamlessly meshing with Eamon Murray’s bodhran. The poignant voice of Dunne is emotive, reflecting the despair of industrial labor. Graham backing vocals complement the lead voice. Sentimental narrative underscores “A Delicate Thing”, as the working class protagonists are redeemed by love. “Both Sides The Tweed” gives the band a traditional format, emphasizing their Celtic roots.

Two engaging covers provide a different template for the group. Steely Dan’s “Dirty Work” receives a faithful adaptation. Dunne’s singing is a deft vehicle for the weary refrain of tenuous romance. The band sparkles on the jazz standard, “Please Don’t Talk About Me When I’m Gone”. A spirited “jug” arrangement frames the breezy vocals in a relaxed setting, spurred on by McKee’s bouncy runs.

Stockfisch has reproduced the live feel of this extraordinary group with great precision. The separation of the instrumentation (especially between guitar and violin, and accordions) eliminates the occasional dint of live recording. The balance of the sound seems proportionate. Vocals never impinge on the music, and vice versa.

Live At Stockfisch Studio is a towering achievement. audiophile audition