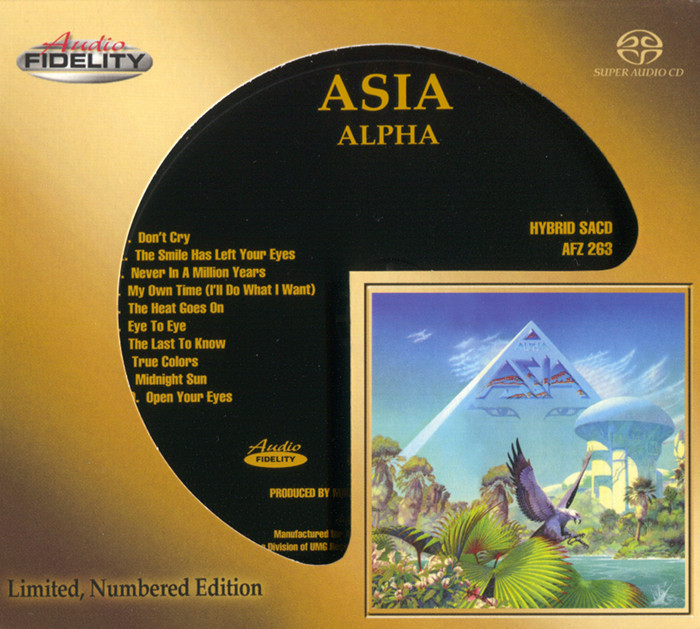 Alpha is the second studio album by British rock band Asia, released in 1983. It was certified platinum in the United States, eventually selling close to two million copies. Released one year before the departure of guitarist Steve Howe, Alpha was the last album with the band’s original line-up until 2008’s Phoenix, after the original members reunited in 2006, and the last album with Howe until Aqua in 1992.

The eagerly awaited follow-up to the supergroup’s debut, Alpha landed with a resounding thud a year later. The album still managed to be a platinum-selling Top Ten hit, as did the leadoff single “Don’t Cry,” but where Asia managed to make old sounds fresh, Alpha fails miserably. Nothing on Alpha packs the sheer sonic force of the band’s debut. Instead, much of the record is lightweight both lyrically and musically, leaning heavier on keyboard-laden ballads like “The Smile Has Left Your Eyes,” which managed to scrape into the Top 40, and “My Own Time (I’ll Do What I Want).” The only real meat on the record comes during the last cut, “Open Your Eyes” (and only at the end of the song). Rumored creative differences, the album’s lukewarm reception, and flagging ticket sales for the ensuing tour led to lead singer John Wetton leaving the band before the year was out. Alpha is sorely disappointing, especially coming on the heels of a promising debut.

Note:
Mastered for this SACD by Kevin Gray at Cohearent Audio.
Authoring by Stephen Marsh at Marsh Mastering.