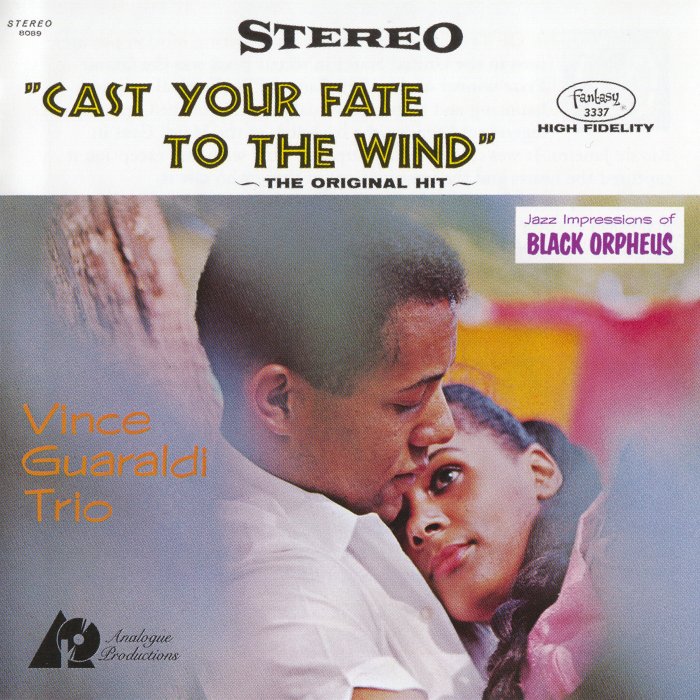 In the early Sixties, the Brazilian import called bossa nova swept through jazz. The music’s most prominent composer was Antonio Carlos Jobim, and his score for the 1959 motion picture “Black Orpheus” was packed with songs adopted by jazz musicians. Vince Guaraldi was one of the earliest to grasp the possibilities of bossa nova and recorded four of the Black Orpheus pieces in this 1962 album. He also played two standards and two of his own compositions. One of those originals was a pleasantly rhythmic little melody called “Cast Your Fate To The Wind” which cut like a beam of sunshine through the pop music gloom of the day, beat the odds against quality music and illuminated the upper regions of the national sales charts for nearly half a year.

Here is Vince Guaraldi’s breakthrough album — musically, commercially, in every which way. After numerous records as a leader or sideman, for the first time a recognizable Guaraldi piano style emerges, with whimsical phrasing all his own, a madly swinging right hand and occasional boogie-influenced left hand, and a distinctive, throat-catching, melodic improvisational gift. The first half of the program is taken up by cover versions of tunes from the Antonio Carlos Jobim/Luiz Bonfa score for the film Black Orpheus, recorded just as bossa nova was taking hold in America. These are genuinely jazz-oriented impressions in a mainstream boppish manner, with only a breath of samba from Monty Budwig (bass) and Colin Bailey (drums) in the opening minute of “Samba de Orpheus”; an edited version of this haunting song was issued as a 45 rpm single. But DJs soon began flipping the single over to play the B-side, a wistful, unforgettably catchy Guaraldi tune called “Cast Your Fate to the Wind” that opens the North American half of the album. The tune became a surprise hit; Fantasy redesigned the cover to call attention to it, and Vince was on his way to fame as one of Latin and mainstream jazz’s most irresistible composers. The whole album evokes the ambience of San Francisco’s jazz life in the 1960s as few others do — and such is this record’s appeal that even non-jazz and non-Latin music people have been grooving to this music ever since it came out.

About the Mastering:
This music was recorded using only vacuum-tube components. As this is the primary reason the sound is so lush and natural, Doug Sax mastered this recording from the original analog tapes using the Mastering Lab’s proprietary all-tube electronics until the final digital conversion. Sax used the latest third-generation Analog-to-DSD converters by Ed Meitner/EMM Labs to transfer the music to the SACD layer.