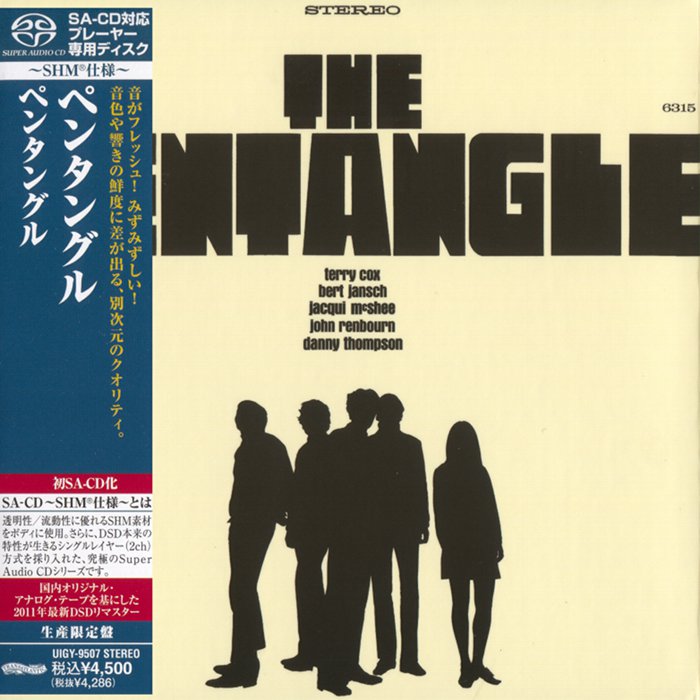 Pentangle (or The Pentangle) are a British folk-jazz band with an eclectic mix of folk, jazz, blues and folk rock influences. The original band was active in the late 1960s and early 1970s, and a later version has been active since the early 1980s. Their debut album “The Pentangle” brought together their separate influences of folk, jazz, blues, early music and contemporary songwriting. One of the band’s most commercially successful albums, it reached number 21 in the British charts.

Were Pentangle a folk group, a folk-rock group, or something that resists classification? They could hardly be called a rock & roll act; they didn’t use electric instruments often, and were built around two virtuoso guitarists, Bert Jansch and John Renbourn, who were already well-established on the folk circuit before the group formed. Yet their hunger for eclectic experimentation fit into the milieu of late-’60s progressive rock and psychedelia well, and much of their audience came from the rock and pop worlds, rather than the folk crowd. With Jacqui McShee on vocals and a rhythm section of Danny Thompson (bass) and Terry Cox (drums), the group mastered a breathtaking repertoire that encompassed traditional ballads, blues, jazz, pop, and reworkings of rock oldies, often blending different genres in the same piece. Their prodigious individual talents perhaps ensured a brief lifespan, but at their peak they melded their distinct and immense skills to egg each other on to heights they couldn’t have achieved on their own, in the manner of great rock combos like the Beatles and Buffalo Springfield.

There’s something exciting about the first album of a band that goes on to greatness, and The Pentangle, by the group of the same name, is no different. Here, the listener witnesses the first studio work of a band struggling to get their essence down on vinyl. Of course Bert Jansch and John Renbourn’s reputations as guitarists preceded the band, but the addition of bassist Danny Thompson and drummer Terry Cox gave the band an acoustic rhythm section like no other folk-rock group. Singer Jacqui McShee became the last piece of this intricate English puzzle, delivering high, expressive vocals that contrasted and merged so well with Jansch’s deeper pipes. The group doesn’t hold back on their first outing. On “Hear My Call” McShee offers a dreamy vocal, floating high above the bluesy guitars. The soaring vocal and firmly grounded rhythm highlight one another, creating a carefully layered sound that is present in all of Pentangle’s best music. This dynamic works equally well in “Pentangling,” with McShee and Jansch’s voices combining light and dark shadows to concoct a strangely atmospheric harmony. The rocking and rollicking “Way Behind the Sun” is another standout, and the instrumentals “Bells” and “Waltz” are complex and lively. The album’s spacious arrangements take full advantage of stereo, mixing instruments to different tracks so that the listener, for instance, can always hear Jansch’s guitar on one side and Renbourn’s on the other. This group, it seems, had it all. Equally comfortable with traditional songs, instrumentals, and originals, they made few missteps on their early albums. Like Fairport Convention and the Incredible String Band, Pentangle specialized in updating British Isles’ folk music.