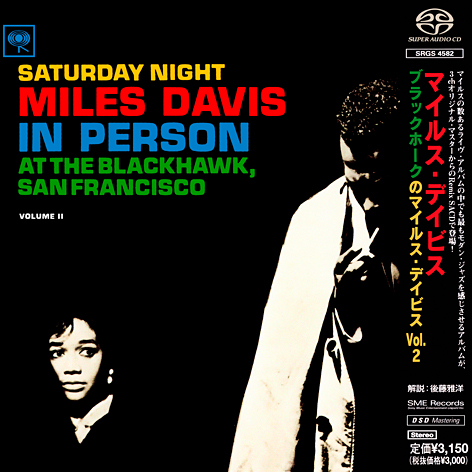 The second volume in the (finally) complete recordings from Miles Davis’ legendary two-night stand at the Blackhawk in 1961 with his new quintet — which featured Hank Mobley, Wynton Kelly, Paul Chambers, and Jimmy Cobb — is as stunning as the first. While this set has been available in many different configurations in the U.S. and Japan over the years, it has never been complete until now. In Person: Saturday Night at the Blackhawk features no less than nine unreleased performances — including an unprecedented fourth set on two CDs. The groove is quite different on Saturday evening. Rather than the slashing bop of Sonny Rollins’ “Oleo” from Friday, a loping, bluesed-out version of “If I Were a Bell” opens the program. Kelly’s interplay with Davis here is enlightening and inspiring; his comps and fills dance around the trumpeter’s solo without ever punching through its center. His sense of timing is remarkable in how he anticipates the end of Miles’ lines. He shifts gears with Mobley, who is in a speedier Coleman Hawkins mood here and pushes the middle harder, more percussively, as Mobley then plays all around the changes. This gives way to an unbelievably speedy “So What,” clocking in at over 12 minutes and driven by Chambers’ pizzicato bass playing. Davis’ solo in the first few choruses is more reminiscent of his tenure with Charlie Parker than anything of his own, except for the warmer tone. The tune is an odyssey of harmonic invention with Kelly acting as a bridge between Davis and Mobley, offering wide-open sevenths and diminished fifths for each player to wander in and out of. Kelly’s solo comes right out of the blues, pure and angular; his touch is heavier — deep left-hand accents and trills decorate it.