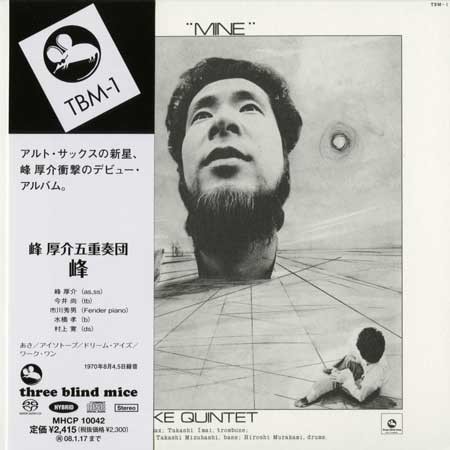 Japanese jazz is one of jazz’s best-kept secrets. But, it would be a a huge loss to miss “Mine”, the sublime first album of Kosuke Mine Quintet, released in 1970 on the legendary Three Blind Mice label. The record, made of 4 long pieces where Kosuke Mine’s sax (alto and soprano) and Hideo Ichikawa’s fender Rhodes never stop to respond each other is a monument of dense and spiritual jazz.

Kosuke Mine (峰厚介) (born Kenji Wakabayashi, February 6, 1944, Tokyo) is a Japanese jazz saxophonist. Mine played clarinet as a youth before switching to saxophone as a teenager. He began recording as a leader around 1970, and worked during this time with Masabumi Kikuchi, Joe Henderson, and Mal Waldron. He moved to New York City in 1973, but came back to Japan in 1975, and subsequently became a member of the fusion group Native Son. He has also worked with Nobuyoshi Ino, Sadao Watanabe, and Terumasa Hino.

“Mine” was the debut album by Kosuke Mine, a young, up-and-coming alto saxophonist who was just beginning to get attention of jazz listeners. (He later switched to tenor sax.) His quintet consists of young musicians who are all technically outstanding and shared Mine’s progressive and challenging, but always swinging style. It has stood the test of time, and even today, sounds fresh, exciting and just plain brilliant. No wonder Mine and Three Blind Mice turnd heads and went on to achieve greatness. This is a stunning debut album. Highly recommended!