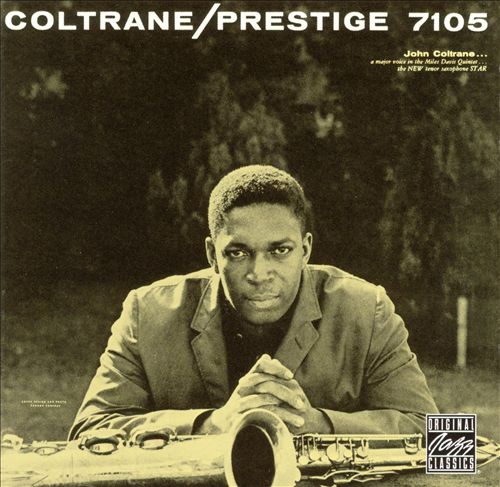 On his first session as a bandleader, tenor saxophonist John Coltrane is joined by Johnny Splawn on trumpet, Sahib Shihab on baritone sax, and a rhythm section of bassist Paul Chambers and drummer Albert “Tootie” Heath with piano duties split between Mal Waldron and Red Garland. Right out of the gate, the propulsive syncopated beat that drives through the heart of Coltrane’s fellow Philly denizen Calvin Massey’s “Bakai” indicates that Coltrane and company are playing for keeps. Shihab’s emphatic and repetitive drone provides a manic urgency that fuels the participants as they weave in and out of the trance-like chorus. Coltrane grabs hold with bright and aggressive lines, turning the minor-chord progressions around into a spirited and soulful outing. While the refined and elegant “Violets for Your Furs” as well as the slinky and surreptitious “While My Lady Sleeps” are undeniably ballads, they aren’t redundant. Rather, each complements the other with somewhat alternate approaches. “Violets for Your Furs” develops the role of the more traditional pop standard, whereas the somnolence is disrupted by the tension and release coursing just below the surface of “While My Lady Sleeps.” The Coltrane-supplied “Straight Street” is replete with the angular progressions that would become his stock-in-trade. In fact, the short clusters of notes that Coltrane unleashes are unmistakable beacons pointing toward his singular harmonics and impeccably timed phrasing on 1960’s Giant Steps and beyond. The closer, “Chronic Blues,” demonstrates Coltrane’s increasing capacity for writing and arranging for an ensemble. The thick unified sound of Coltrane, Splawn, and Shihab presents a formidable presence as they blow the minor-chord blues chorus together before dissolving into respective solos. The trio’s divergent styles prominently rise, pitting Shihab’s down-and-dirty growl against Coltrane’s comparatively sweet tones and Splawn’s vacillating cool and fiery fingering. Regardless of the listener’s expertise, Coltrane is as enjoyable as it is thoroughly accessible.