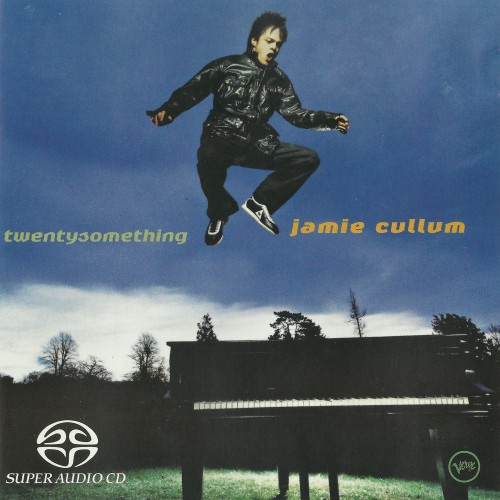 Already a sensation in his native England, 22-year-old piano man Jamie Cullum comes off like a hip amalgamation of Harry Connick, Jr. and Randy Newman on his sophomore effort, Twentysomething.

As with Blue Note’s crossover wunderkind Norah Jones, Cullum works best when he’s not trying too hard to please hardcore jazz aficionados, but it’s not too difficult to imagine his bonus-track version of Pharrell Williams’ “Frontin’” turning some jazz fans onto the Neptunes. Showcasing Cullum’s sardonic wit and lounge-savvy attitude, the album deftly flows from singer/songwriter love songs to jazzy barroom romps and reappropriated modern rock tunes. Cullum has a warm voice with a slight rasp that retains a bit of his Brit accent even though his influences — Nat King Cole, Frank Sinatra, Tom Waits — are resolutely American. Truthfully, Cullum isn’t the most accomplished vocalist and his piano chops are pleasant at best — Oscar Peterson he ain’t. That said, he’s still a kick. What he lacks in technique he makes up for in swagger and smarts as many of his original compositions reveal. On the swinging and wickedly humorous title track — a take on postgraduate slackerdom — Cullum sardonically laments, “After years of expensive education, a car full of books and anticipation, I’m an expert on Shakespeare and that’s a hell of a lot but the world don’t need scholars as much as I thought.” It’s a timely statement in our overeducated, underemployed “dot-bomb” economy and deftly posits Cullum as a jazz singer as much of as for his generation. Also compelling are his choices of cover tunes, as he is able to imprint his own persona on the songs while magnifying what made them brilliant to begin with. To these ends, Jeff Buckley’s “Lover, You Should’ve Come Over” gets a gut-wrenchingly minimalist treatment and Radiohead’s “High and Dry” comes off as the best Bruce Hornsby song you’ve never heard. Conversely, Cullum treats jazz standards as modern pop tunes, reworking them into contemporary styles that are neither cynical nor awkward. In fact, his atmospheric, ’70s AM pop take on “Singin’ in the Rain,” replete with string backgrounds and Cullum’s percolating Rhodes keyboard, is one of the most appealing cuts on the album, lending the Great American Songbook warhorse an air of virginity.