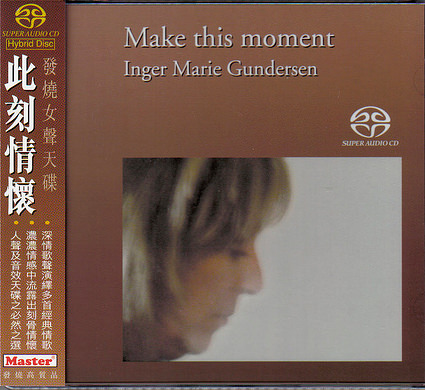 Inger Marie waited for many years before she ventured upon a solo career, but she has ample experience from many years’ activities in the music field. For twenty years she has been active as vocalist in several bands, ranging from a youthful rock band to a six year period as lead singer of a jazz big band. She has also fronted her own jazz quintet ”My Favorite Strings”, as well as collaborating with several excellent jazz musicians, among them Tom Lund, one of Norway’s finest Latin jazz-guitarists, founder of the renowned group ”Trio de Janeiro”. ”Make This Moment” was released in Norway in October 2004. The album received rave reviews and instant recognition by jazz aficionados. After some months, Inger Marie’s voice started touching hearts and impressing music lovers in places far from Norway. Now the album has been released in most of Asia, as well as in Europe, and has touched the hearts and souls of thousands of listeners.

Anyone hearing the debut album of IMG, “Make This Moment”, will realise that this is an artist belonging to the elite of this style, and that she is totally involved with a kind of music that she really loves. After years singing in rock bands and big bands, trying out different styles of music, Inger Marie has found a home in jazz. The love and maturity with which she delivers sublime interpretations of both new songs and well-known standards, makes this a debut album of rare quality. Producer Lars Martin Myhre says that never did he get a bigger surprise than when Inger Marie Gundersen made her debut in a recording studio. She was displaying a voice so controlled, so beautiful and so personal at her first recording date that the seasoned producer was left sitting there with his mouth open, admiring the awareness and the warm and direct communication in her voice.In a music world where different shades of jazz-pop and more or less succsessful artists have entered the mainstream, this mature first timer enters with an unprecedented maturity and command of the style.