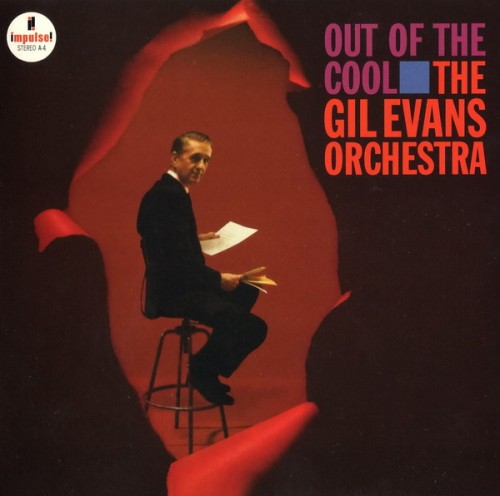 Out of the Cool, released in 1960, was the first recording Gil Evans issued after three straight albums with Miles Davis — Sketches of Spain being the final one before this. Evans had learned much from Davis about improvisation, instinct, and space (the trumpeter learned plenty, too, especially about color, texture, and dynamic tension). Evans orchestrates less here, instead concentrating on the rhythm section built around Elvin Jones, Charlie Persip, bassist Ron Carter, and guitarist Ray Crawford. The maestro in the piano chair also assembled a crack horn section for this date, with Ray Beckinstein, Budd Johnson, and Eddie Caine on saxophones, trombonists Jimmy Knepper, Keg Johnson, and bass trombonist Tony Studd, with Johnny Coles and Phil Sunkel on trumpet, Bill Barber on tuba, and Bob Tricarico on flute, bassoon, and piccolo. The music here is of a wondrous variety, bookended by two stellar Evans compositions in “La Nevada,” and “Sunken Treasure.” The middle of the record is filled out by the lovely standard “Where Flamingos Fly,” Kurt Weill-Bertolt Brecht’s “Bilbao Song,” and George Russell’s classic “Stratusphunk.” The sonics are alternately warm, breezy, and nocturnal, especially on the 15-plus-minute opener which captures the laid-back West Coast cool jazz feel juxtaposed by the percolating, even bubbling hot rhythmic pulse of the tough streets of Las Vegas. The horns are held back for long periods in the mix and the drums pop right up front, Crawford’s solo — drenched in funky blues — is smoking. When the trombones re-enter, they are slow and moaning, and the piccolo digs in for an in the pocket, pulsing break.