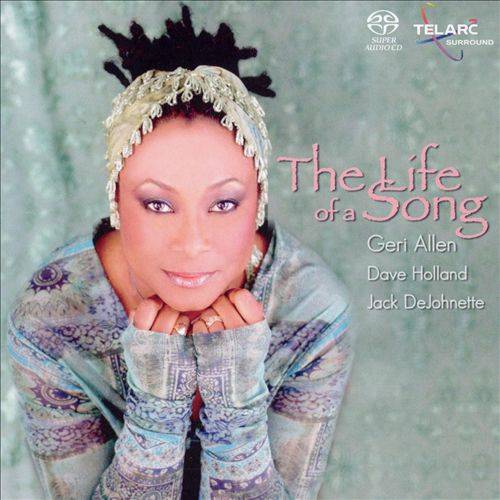 Life of a Song is Geri Allen’s first recording under her own name in six long years. She teams with the rhythm section of bassist Dave Holland and drummer Jack DeJohnette, whom she worked with on the late Betty Carter’s stellar live date Feed the Fire in 1993. Allen composed eight of the album’s 11 cuts, and the covers include Bud Powell’s “Dance of the Infidels,” Billy Strayhorn’s “Lush Life,” and Mal Waldron’s “Soul Eyes.” This last selection is augmented by the participation of Marcus Belgrave on flugelhorn, saxophonist Dwight Andrews, and trombonist Clifton Anderson.

The album’s title reflects the depth of commitment to the song forms inherent in jazz. Allen is in fine form here, and one can hear her various instrumental and vocal influences. The album swings, but looks underneath swing for its subtleties and its edges, too. The set opens with a playful, pianistic dissonance on “LWB’s House (The Remix)” – and lest punters be alarmed, the tune is not “remixed” at all, but is actually an earlier composition reworked. The bluesy funk here is augmented with Afro-Cuban rhythms and a series of tonal shifts where Allen is trying to emulate the African stringed instrument, the kora. Swing is inherent in every chorus, and Holland and DeJohnette keep the pace relaxed yet deeply focused. The interplay between Holland and Allen on “Mounts and Mountains” – particularly during the bassist’s solo passage – are remarkable as she responds with a contrapuntal solo that draws on both Herbie Hancock and Ahmad Jamal. Elsewhere, on the Powell tune her facility to usher it in a relaxed, easy way, and then dazzle with her two-handed counterpoint in the solo showcase Allen’s quick wit and dazzling chromatic command. The title cut, with its obvious Hancock homage in the head and swinging head, is one of the album’s many high points. This is a trio date that has all the elements: an indefatigable lyricism and honesty of emotion, as well as beautiful colors and deft, even uncanny engagements among the three principals. What a welcome return for Allen, who expertly displays she’s been refining her chops and listening deeply to her Muse these past six years.