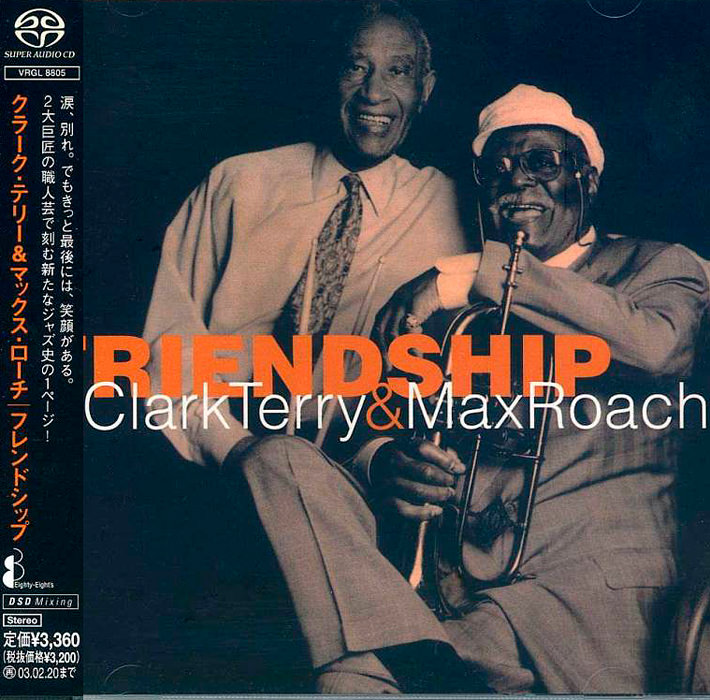 Friendship is a very special album Clark Terry and Max Roach recorded together in 2002. At that time, Terry was 82 years old and Roach 78, and as it turned out to be one of the last recordings Roach made before passing in 2007. The bulk of this unique album consists of six duo performances by the two principals, two solo performance by Terry, one solo performance by Roach, and the remaining four are trio and quartet performances with pianist Don Friedman and bassist Marcus McLaurine.

Friendship is a recording of fresh, swinging music with broad but intelligent appeal to committed Terry or Roach fans as well as new listeners just coming to an appreciation of these great musicians. Clark Terry demonstrates the flawless technique, buttery sound, and elegant, good-natured, witty improvisation for which he is famous. Roach offers, as always, a powerful conception of the drums, using a wide and creative sound palette. His approach on this recording is so unassuming that it is easy to lose sight of how complete his playing is in itself. “Lil’ Max,” for example, is a musical whole. It takes a bit of attention to realize that it is also an unaccompanied drum solo.

Both Don Friedman and the inexplicably under-recognized Marcus McLaurine have long been associated with Terry. Everyone sounds comfortable with themselves, each other, and the straightforward, but demanding quartet setting. Friendship also has an eclectic side. The album begins with “Statements,” a free jazz duet between the co-leaders. The set includes Monk’s “Let’s Cool One” and the standards “But Beautiful,” “When I Fall in Love,” “Makin’ Whoopee,” “The Nearness of You,” and “I Remember Clifford.” By continuing to perform at this level, Terry and Roach, who for decades have had nothing to prove to anyone, not only enrich us musically yet again—they also teach important lessons about artistic integrity. We are lucky to have their example.