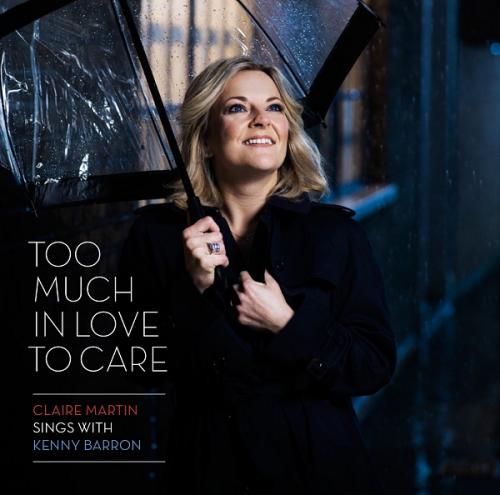 Too Much in Love to Care’ is Claire Martin’s first US studio recording for fifteen years and guest stars Kenny Barron, ‘one of the top jazz pianists in the world’ (LA Times). It was named ‘Best New Album’ at the 2013 British Jazz Awards.

With musical inspirations like Judy Garland, Ella Fitzgerald and Betty Carter, it is no surprise Claire Martin would succeed as a jazz singer. At twenty-one she fronted a quartet and was signed to Scottish label, Linn. Her debut, The Waiting Game was The Times album of the year and immediately put her among the elite of English jazz singers. Soon after the release of the album, she opened for Tony Bennett (who has become a huge fan) at the Glasgow International Jazz festival. Her pristine vocals and intuitive feel for melodic interpretation shaped her musical vision.

Subsequent albums brought the attention of the American music culture, when she recorded a live album at Ronnie Scott’s legendary nightclub. Overall Martin has made thirteen records with Linn Records, collaborating with Martin Taylor, John Martin, Stephane Grappelli, Mark Nightingale, Sir Richard Rodney Bennett, Jim Mullen and Nigel Hitchcock. Many of these projects have contained popular modern music and songs of The American Songbook. Ms. Martin has been appointed Officer Of The Order Of The British Empire (O.B.E), in addition she is a co-presenter for Jazz Line Up on BBC Radio 3.

Claire Martin’s latest album is a collection of vintage American standards. She has decided to record with piano legend, Kenny Barron. Barron has an extensive career with harmonious jazz arrangement. Backed by Peter Washington (bass), Kenny Washington (drums) and Steve Wilson (saxophone, flute), the band is fully capable of propelling Martin’s talent into American Songbook respectability. Opening the set is a surprising version of the eclectic “Too Much In Love To Care” (apparently unrecorded since Carmen McRae in 1954). Martin’s breezy, sophisticated phrasing is impeccable. The latin-fused quintet (with a jaunty flute by Steve Wilson) swings effortlessly. The singer has always enjoyed a special chemistry with pianists. On the Gershwin classic, “Embraceable You”, she gets to perform a duo with one of the best interpreters of romantic music, Kenny Barron. His playing is concise (almost Basie-like) and lyrical. With a slight up tempo, Martin singing is artistic, reminiscent of her hero, Ella Fitzgerald. Even on a song covered by nearly everyone (“Time After Time”), her take is fresh and vibrant. Barron executes a finger-snapping elegance that shines. Demonstrating a bluesy nuance, “How Long Has This Been Going On” is wistful. Bassist Peter Washington joins with an intricate solo on double bass.

Martin possesses all of the requisite elements of jazz singing, including flawless elocution, excellent timing and an ability to intermingle her vocal tones with the ensemble. The band is superb, especially on the saucy cover of “Lazy Afternoon”. Kenny Washington’s drumming is masterful and anchors the stylish, jazzy vibe. The arrangements are never dull. “I Only Have Eyes For You” adopts a gentle swing groove and reinvents itself. There is also a warm familiarity with the material as evidenced by the slow-burning, “I’m Glad There Is You”. Martin injects emotional poignancy, but not excessively. The finale (“Too Late Now”) reunites her with Barron in a heartfelt ballad.

Too Much In Love To Care is a superlative album. From the stylistic, “cool” jazz of the quartet to the assured, versatile singing, all of the pieces fit intuitively. The SACD Stereo sound is powerful and engineered with crisp tonality and warmth. The detailed mixing of Martin’s velvet voice and outstanding diction is amazingly clear and distinctive. The separation is first class and uncluttered.