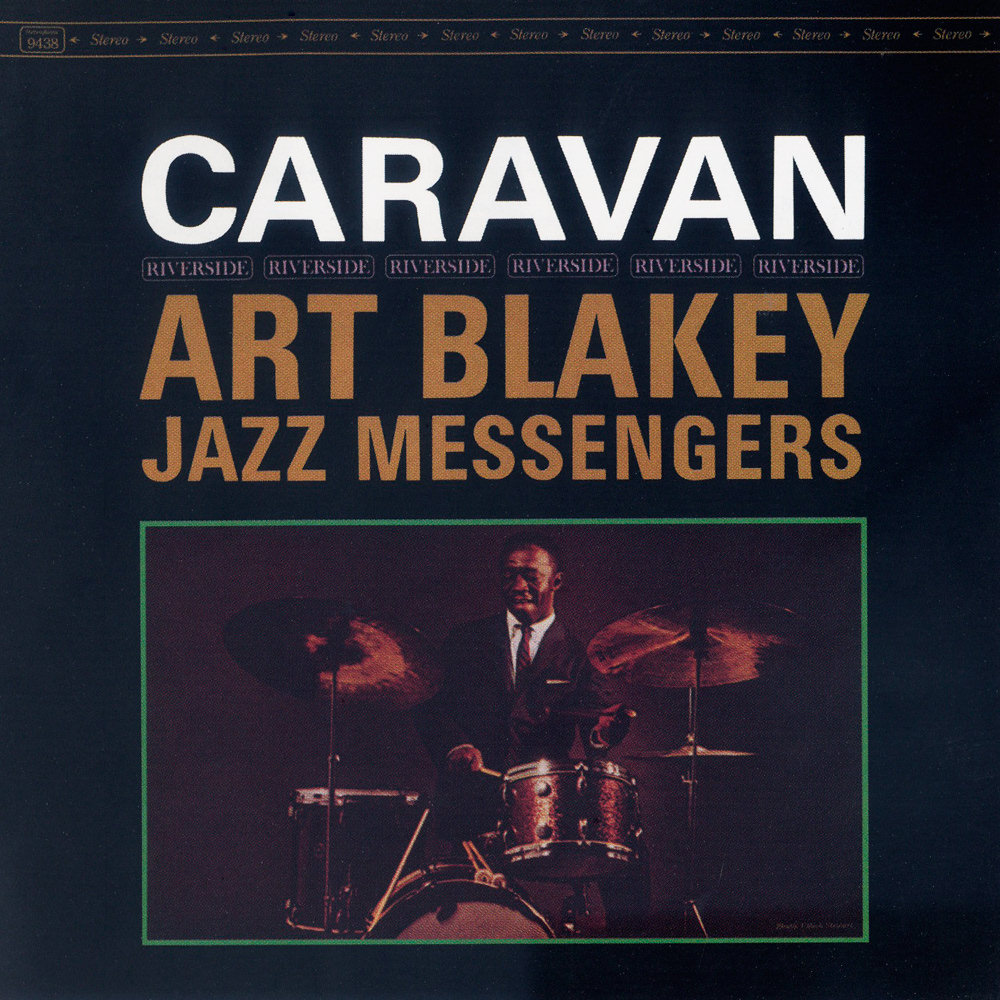 Art Blakey led many editions of his Jazz Messengers over more than three decades, but a strong argument can be made that the Messengers of his Riverside period constituted his strongest unit. With Freddie Hubbard, Wayne Shorter, and Curtis Fuller in the front line, with Cedar Walton and Reggie Workman as Blakey’s rhythm-section mates, its combination of musicianship and sheer swinging force has rarely been equaled in a small band. Caravan was the first of Blakey’s Riverside albums and endures as a living monument to his nonpareil drumming and leadership. His solo on the title tune is one of the finest recorded examples of Blakey’s unique melding of precision and power. Hubbard and Shorter contributed memorable compositions and, with Fuller and Walton, some of the greatest soloing of the 1960s. Caravan rolls again in the full color and range of SACD sound.

By the time that jazz icon/bandleader/percussionist Art Blakey and his Jazz Messengers began recording for Riverside in the fall of 1962, Blakey had already been the spiritual center of the group for nearly 15 years. The unprecedented caliber of performers who had already passed through the revolving-door personnel reads like a who’s who of 20th century jazz. On Caravan – his first of several notable sides for the venerable label – he is joined by a quintet of concurrent and future all-stars. Likewise, it could be argued that each has never again been presented in such a fresh or inspired setting as on these recordings. In order to establish with any authority just how heavy (even for purveyors of hard bop) the players in this band are, they need only to be named: Curtis Fuller (trombone), Freddie Hubbard (trumpet), Wayne Shorter (tenor sax), Cedar Walton (piano), and Reggie Workman (bass). With Blakey (drums) firmly at the helm, these Jazz Messengers deliver a scintillating synergy that doesn’t sacrifice intensity for the sake of cadence. The trademark give-and-take that graces the laid-back and sophisticated pop and jazz standards “Skylark” and “In the Wee Small Hours of the Morning” likewise is responsible for the palpable energy brought to the sizeable contributions from Shorter and Hubbard – which make up half of the album’s material. The title and leadoff track liquefies Duke Ellington’s original arrangement and ignites it, fueling this extended fiery interpretation. Hubbard’s first solo harks back to his own recording of “Caravan,” which can be heard on the Impulse release Artistry of Freddie Hubbard and was recorded earlier the same year. Coincidentally, that disc also features Curtis Fuller as well as a rare non-Sun Ra-related appearance from John Gilmore (tenor sax). Blow for blow, however, this reading has more than just an edge – it possesses the entire blade. The melody snakes in and out of Blakey’s strident flurry of syncopation. Another highlight is Shorter’s interjectory solo, recalling his ability to succeed John Coltrane in Miles Davis’ coterie. Among the original compositions, Shorter’s upbeat “Sweet ‘n’ Sour” stands out as the most cohesive and ensemble-driven, although the singular group dynamic is well applied to the lively “This Is for Albert” as well. By contrast, Hubbard’s “Thermo” is more angular – taking full advantage of the musicians’ aggressive chops. The 2001 20-bit remaster from Fantasy contains two bonus tracks: take four of “Sweet ‘n’ Sour” and take two of “Thermo.” This release can be considered definitive Blakey, bop, and Jazz Messengers.