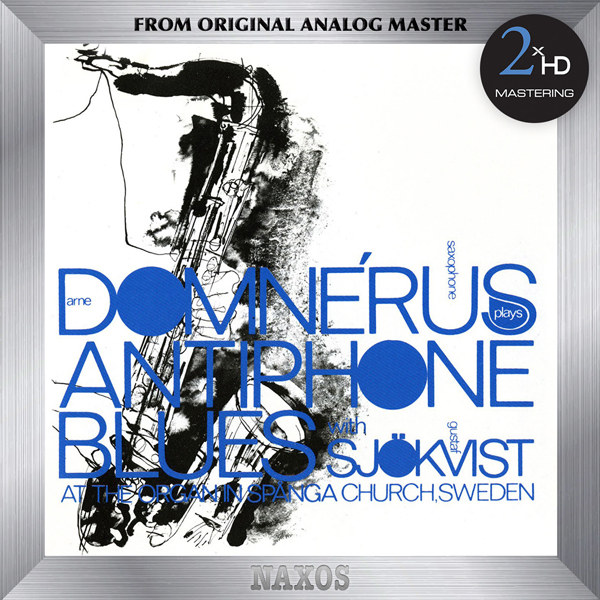 DSD file created from analog master.
Maestros Arne Domnerus (saxophone) & Gustaf Sjokvist (organ) play Classical and jazz/spiritual duets (several associated with Maestro Duke Ellington). Considered to be one of the best recordings of saxophone performance in decades. Arne Domnerus, a living legend, is at the height of his mastery of the instrument. The sonic excellence brings heartfelt emotion to a listener, regarded by some as ‘A record for life!’

Swedish-born saxophonist Arne Domnérus looms large in the annals of European jazz — his breakthrough performance at the Paris Jazz Fair of 1949 is widely cited as the tipping point of the Scandinavian bop movement. Born in Stockholm on December 20, 1924, Domnérus studied clarinet as a child and made his professional debut during the early ’40s, playing alto sax in popular dance bands led by Lulle Ellboj and Simon Brehm. By 1942 he led his own group and made his recorded debut in 1945, honing an urbane, sophisticated style that nevertheless possessed an urgency often absent from the cool, remote tone often associated with Swedish jazz. American icons Charlie Parker and Dizzy Gillespie were both in attendance for Domnérus 1949 Paris festival gig, a performance which served notice that players of European descent could offer their own authoritative interpretations of music largely considered an African-American phenomenon — Parker was so impressed that he signed Domnérus for the Scandinavian tour he mounted a year later. Throughout the ’50s Domnérus headlined the Stockholm jazz club Nalen, often appearing alongside trumpeter Rolf Ericson and baritone saxophonist Lars Gullin (who both turn up in the 1952 short film Arne Domnérus Spelar). Domnérus also joined Stockholm locals including pianist Bengt Hallberg for a landmark 1953 Swedish tour in support of American trumpeters Clifford Brown and Quincy Jones. From 1956 to 1965 Domnérus served as a member of Harry Arnold’s Swedish Radio Big Band, continuing on with its successor Radiojazzgruppen through 1978 — concurrently he wrote for television and films, most notably scoring 1966’s Nattlek, a film produced by Mai Zetterling and based on her own novel. Domnérus’ 1977 LP Jazz at the Pawnshop proved an unprecedented hit, selling more than half a million copies upon its original release — a year later, he returned with Duets for Duke, a collaboration with Hallberg that captures both men at the zenith of their artistry. While remaining true to his bop roots, Domnérus cited traditional Scandinavian folk music as a growing influence throughout the later chapters of his career, and from the ’70s on he regularly performed live in churches, inspired by Duke Ellington’s own sacred concerts. He also toured the U.S. and Japan, and recorded with American notables including Clark Terry, James Moody and Jimmy Rowles. After several years in poor health, Domnérus died in Stockholm on September 2, 2008 at the age of 83. –Artist Biography by Jason Ankeny

Note:
For the 2xHD transfer of this recording, the original 1/4”, 15 ips CCIR master tape was played on a Nagra-T modified with high-end tube playback electronics, wired with OCC silver cable from the playback head direct to a Telefunken EF806 tube. The Nagra T has one of the best transports ever made with four direct drive motors, two pinch rollers and a tape tension head. We did an analog transfer for each high-res sampling and A & B comparisons were made with the original LP, using the KRONOS turntable with a BLACK BEAUTY tone arm. 192kHz was done using Ayre QA9pro, DSD was done using dCS 905 and dCS Vivaldi clock, DXD 352.8kHz was done using dCS 905 and dCS Vivaldi clock, DSD2 was done using Ayre QA9pro.