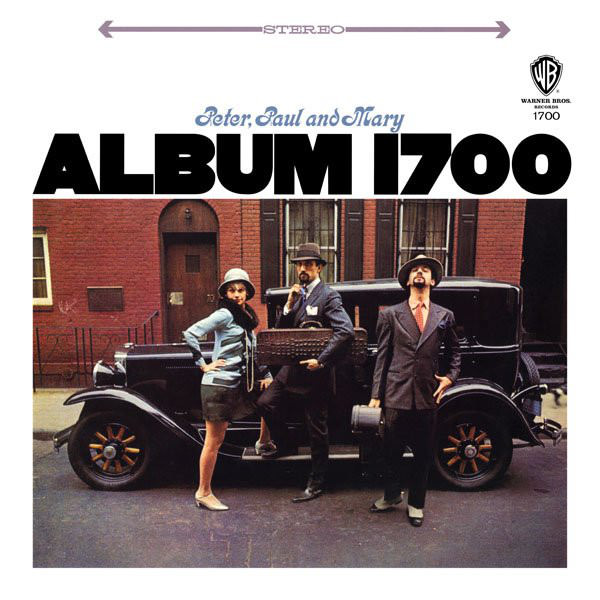 Arguably Peter, Paul and Mary’s best record since their debut LP, Album 1700 (named for its catalog number) found the trio confidently incorporating the stylistic developments first introduced on Album while growing enormously as songwriters. As usual, their songwriting peers were included, as the album led off with Eric Andersen’s “Rolling Home,” followed by John Denver’s “Leaving On A Jet Plane” (a recording that would find belated success in a couple of years) and also featured “Bob Dylan’s Dream,” another Freewheelin’ alumnus.
But eight of the 12 songs were credited to the singers, singly, or in combination with co-writers. And they were of unusual quality. Yarrow’s “The Great Mandella (The Wheel of Life)” was an agonizing anthem about the struggle and death of a pacifist. The song not only expressed what many in the anti-war movement felt, but predicted much of the cynicism and despair they would come to experience.

Stookey’s “The House Song” was an extended metaphor that began a journey of self-discovery for the songwriter. “The House Song’ was a curiosity for me because it truly began as a song about a house and then transformed itself,” Stookey recalled. “It began walking, it became the shell of my life, and it was a beginning, really. The House Song was very significant for me because it was the beginning of telling the truth about my life, which then required me, in a sense, to take seven years off to implement because prior to that I had not been playing with a straight deck.” Such songs were deeply felt statements, and they were only the highlights of an album that also boasted Yarrow’s “Weep For Jamie” and concluded with the stirring, group-written (with Dave Dixon and PP&M on-stage bassist Dick Kniss) “The Song Is Love.”

Yarrow identified one important new name in the credits as a force in achieving the album’s artistic success: chief engineer Phil Ramone. “It is only, really, from my perspective, [with] our association with Phil that there [occurred] a kind of artistic flow and flex that united the album so it felt of one piece, even though each song sounded different,” Yarrow explained. “Phil would make each song its own sonic world. He was officially only the engineer, but he was as much the producer as he ever was. He would suggest ideas that were very, very unusual. In a song for instance like “Weep For Jamie,” he would get a little religious pump organ that would have this textural energy that was so strong, and he would set the echoes in a way that was masterful.”
He adds, “It was just so present and so rich and so spatial, the echo that he created, and he was such a catalyst and such an innovative person. His treatment of echo, for instance, on ‘The House Song’ was just extraordinary. The Paul Winter Consort joined Noel on that. We for the first time used percussion on that album. There was a group called the Paupers, and their percussion player played on some of the songs, like ‘If I Had Wings’. This was a real breakthrough album for us. It completely realized what the experiments were about, and it was really something which, when guided by Phil and led by Phil, really reached a new artistic high for Peter, Paul and Mary: I’d say the second wave of our recording experience was personified by that album. In terms of recordings in the studio, no doubt there was a great leap that we made for Album 1700.”

Album 1700 entered the Billboard Top LP’s chart for the week ending September 2, 1967, and peaked at #15 on October 21. It remained in the charts 28 weeks, falling out of the list in March 1968. Then it returned to the charts in July, stayed for two months and dropped off again. Peter, Paul and Mary were also nominated for the 1967 Grammy Award for Best Folk Performance for Album 1700.

For a 1967 album that managed to yield a number one hit single and an additional Top Ten smash, Album 1700 was pretty out of sync with contemporary trends. This is not exactly a rock record, but the trio was unquestionably making more use of backup musicians and arrangements that owed a bit to pop/rock. (Paul Butterfield, Paul Winter, Canadian rock band the Paupers, and top New York folk-rock session musicians Paul Griffin, Russ Savakus, and Harvey Brooks all play on the record.) They never did sound too comfortable with that form, but at least they didn’t sound as uncomfortable as they had in the past. The material was an uneven mixture of passably pleasant original tunes covering light comedy and social/philosophical commentary, including an honest to God folk-rock cover of Eric Andersen’s “Rolling Home,” albeit with the pure folk harmonies of their early days unchanged; a Bob Dylan cover (“Bob Dylan’s Dream”) that could have easily fit onto a PPM album early in their career; and, perhaps to make sure there was one song for the toddler when it was played in the family living room, the positively embarrassing “I’m in Love With a Big Blue Frog.” “I Dig Rock and Roll Music,” though it made the Top Ten, was not a wholehearted embrace of the new rock sounds, coming off as a rather savage and strange parody of the Mamas & the Papas. The album’s ace in the hole was the melodic and slightly maudlin “Leaving on a Jet Plane,” an early John Denver composition that would became a number one smash in late 1969, two years after the LP’s release. –AllMusic Review by Richie Unterberger