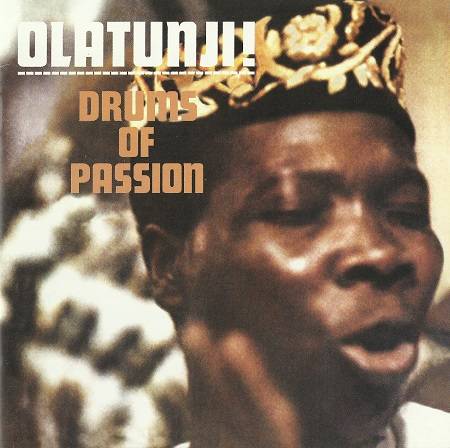 Drums of Passion is an album released by Nigerian percussionist Babatunde Olatunji in 1960. Unquestionably, it was the first recording to popularize African music in the west, becoming immensely successful and selling over five million copies. In 2002, it was released as a single layer stereo and 5.1 SACD by Columbia Records. In 2004 the album was added to the National Recording Registry.

Having come to USA. from his native Nigeria to study medicine, percussionist Babatunde Olatunji eventually became 1 of the 1st African music stars in the States. He also soon counted jazz heavyweights like John Coltrane (“Tunji”) & Dizzy Gillespie among his admirers (Gillespie had, a decade earlier, also courted many Cuban music stars via his trailblazing Latin jazz recordings). And, in spite of it being viewed by some as a symbol of African chic, Drums of Passion is still a substantial record thanks to Olatunji’s complex & raw drumming. Along with a cadre of backup singers & 2 other percussionists, Olatunji works through 8 traditional drum & chorus cuts originally used to celebrate a variety of things in Nigeria: “Akiwowo” & “Shango” are chants to a train conductor & the God of Thunder, respectively, while “Baba Jinde” is a celebration of the dance of flirtation & “Odun De! Odun De!” serves as a New Year’s greeting. The choruses do sound a bit overwrought & even too slick at times (partly due to the fact that most of the singers are not African), but thankfully the drumming is never less than engaging. The many curious world music fans who are likely to check this album out should also be sure to look into even better African drumming by native groups like the Drummers of Burundi & the percussion outfits featured on various field recordings. (The 2002 CD reissue on Columbia/Legacy adds the track “Menu Di Ye Jewe (Who Is This?)”, which was recorded at 1 of the 1959 sessions for the album, but was previously unissued in USA).