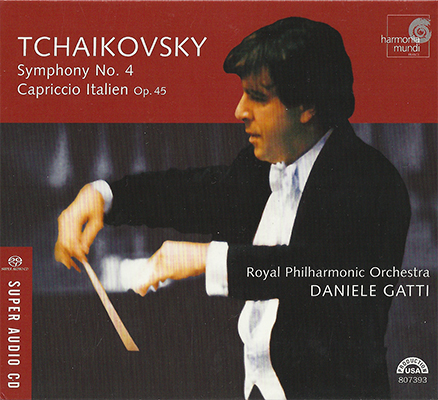 Review by James Leonard
This is really good! No matter how little faith one has in the possibility that anyone could breathe life into a warhorse like Tchaikovsky’s Fourth Symphony, Daniele Gatti has done it with the Royal Philharmonic in this 2005 recording for Harmonia Mundi. Coupled with the equally venerable and equally successful Capriccio Italien, Gatti turns in performances that rip and roar, that excite and inspire, performances so cogent and compelling, so strong and sincere that they even make the doubter believe that Tchaikovsky knew what he was doing as a composer after his nearly fatal nervous breakdown after his spectacularly failed marriage attempt. But Gatti’s control of tempo and texture and his attention to color and line do more than breathe life into Tchaikovsky’s Fourth, his conducting puts some backbone into it. Gatti’s rhythms have real muscle, his developments have real point, and his forms have real power, and when combined with the composer’s glorious melodies and expressive harmonies, this Fourth shakes, rattles, and rolls. The Royal Philharmonic’s performance is first class with sweeping strings, warms winds, bold brass, a percussion section of tremendous might and majesty, and an ensemble both characterful and unified. If old timer stereo buffs still hold to the iron-handed Mravinsky or the leather-gloved Abbado, even they will have to admit that only Jansons of digital recordings comes close to Gatti in making the case for Tchaikovsky’s Fourth as a masterful symphony. Harmonia Mundi’s English-based recorded sound is just as clear and bright as its French- or American-based recorded sound, but also warmer and lusher and more vivid. allmusicguide