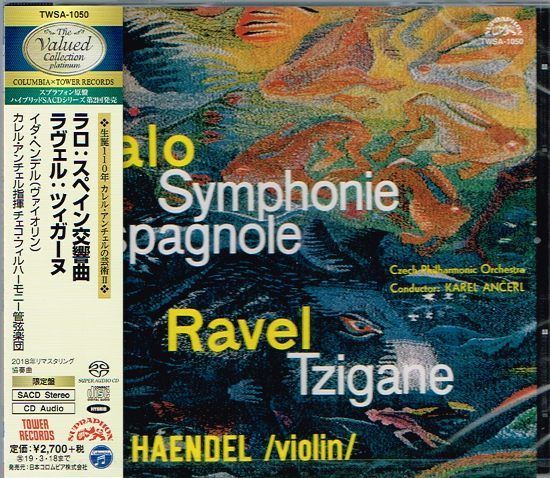 This is the world’s first SACD reissue of Lalo’s famous performance, which combines the beautiful and rich sound of violin of Ida Handel with Czech Philharmonic Orchestra, conducted by Karel Ančerl. This reissue uses a new DSD sound sourced from the original analog master tape. The jacket photo uses the original LP design, renews the sound quality and reprints.

Lalo’s “Symphonie espagnole” is in fact a violin concerto, pure and simple: the title was intended to concentrate the listener’s mind on the Spanish nature of the music. The bold and close recording imposes this flavour immediately, although there is surely more subtlety in the balancing of textures than this; not that the results are less than acceptable. By the time the Spanish rhythms and themes have made their influence tell, Haendel has delivered some commanding virtuoso playing. Perhaps it is in the lighter sections of the middle movements (Nos. 2, 3 and 4 of 5) that the performance comes off best. Here the subtleties are experienced and the clarity of the re-mastered sound is at its most effective. For all that this repertoire makes an unlikely combination, the playing has real style and panache and the disc will give much satisfaction.

Ravel orchestrated his single–movement “Tzigane” soon after he had completed the violin-and-piano original. The piece begins with a cadenza, and while Ida Haendel is held in close focus by the microphone she passes this test of her accuracy and tone quality. When the orchestra appears there are some odd balances, though the overall effect is not unpleasing. Given the vintage of the recording, made nearly 55 years ago, the sound is very good. Karel Ančerl was a skilful orchestral accompanist, among his abundant other talents.

Recorded in the House of Artists in Prague, Czechoslovakia.
Remastered from the original analogue master tapes.