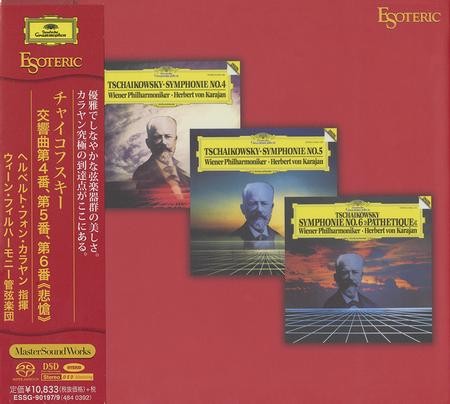 Recordings of such important music entities as the Vienna Philharmonic and Herbert von Karajan are always going to be of importance, and this set is no exception. It highlights a conductor in the twilight of his career with repertoire he was acutely familiar with, and had recorded many, many times. Japanese Esoteric label have produced to be the definitive issue of such recordings.

This recent reissue project by Esoteric, is admittedly a little out of left field. Of the many recordings receiving the audiophile treatment in recent years, one does not hear much about recordings (especially digital) from the 1980s. Listening to a few, one does not have to wonder why. The early digital technology labels were using in the 1980s yielded somewhat unpleasing results to my ears, with recordings that sound rather glassy, with dull strings and somewhat boxy and unrealistic sounding wind instruments. Sure, the dynamics could be stellar thanks to the CD and its lack of potential for tracking errors, but phrasing and texture were sacrificed, at least in the early days. I do not have an original CD or LP of this recording to compare this SACD release to, but I do have a few 80s digital Deutsche Grammophon LPs, and if those are anything to compare, Esoteric has certainly worked wonders with the engineering.

According to their own liner notes, this set was mastered at 96/24bit from an original digital master that was done at Redbook 44/16bit. Getting a good sounding recording on a DSD format out of such a low resolution master is certainly a daunting task.

So, how does this set sound? Well, pretty dark, which is no surprise coming from a Karajan recording, that was his usual standard, especially in his later years. The dynamics are pretty impressive, with the climaxes and percussion hits sounding rather earth-shaking. The problem I run into, is that for some reason the loud sections sound rather boomy and lacking in definition. For instance, whenever the percussion are prominent, the boomyness takes over the soundstage and blurs out any definition in the brass, or orchestra as a whole, you no longer hear instruments, but instead you here “loud”. Also the strings lack the texture here that make them sound like real vibrating instruments in a hall. Particularly, the starts of notes or phrases kind of “fade” in rather than beginning. Finally, in the big sections, the winds sound rather hard, there is a real digital graininess or sibilance that makes the sound rather fatiguing to listen to at concert volume.

All of these problems, I doubt are the fault of Esoteric. It is a label that has consistently put care into its masterings, and this is certainly the best 80s digital recording I have ever heard from Deutsche Grammophon. That being said, I don’t think this recording can escape from the limitations of its birth, which is a harsh early digital sound, mixed with a lack of realistic instrument timbre, particularly noticeable in the string and woodwind sounds. How far can one take such a limited original product? I think this might be the answer to that question. – Review by audiophilia-com