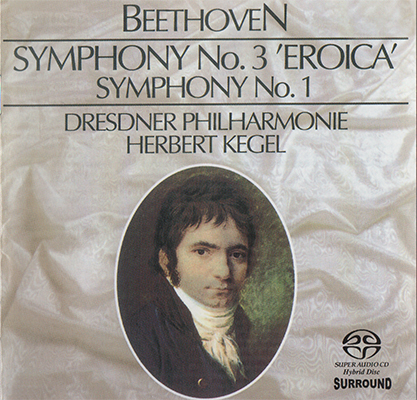 Known in the United States primarily as the conductor of a surefire recording of Orff’s Carmina Burana, Herbert Kegel was respected in Europe as a pivotal figure in establishing the works of such individual Modernists as Blacher, Dallapiccola, Dessau, Penderecki, and Nono in the concert hall and on discs. He was one of the first to champion Britten’s War Requiem, while his recording of Schoenberg’s Moses und Aron was instrumental in keeping this difficult and challenging work before the public. His involvement with Orff’s music typifies the duality of a distinguished career whose impact is not yet fully appreciated and whose legacy remains to be assimilated, for beside the ever-popular Carmina Burana, Kegel also recorded — superbly — the remaining cantatas, Catulli Carmina and Trionfo di Afrodite, speech-inflected works the composer regarded as parts of a single cycle of Trionfi and that look ahead to the uncompromising utterance of his Antigonae and Oedipus der Tyrann. Kegel studied at the Dresden Conservatory, where Karl Böhm was one of his teachers, from 1935 to 1940, beginning his career, after serving as a conscript during the war in 1946, as kapellmeister of the Volkstheater Rostock. From 1949 to 1978 he was associated with the Leipzig Radio Orchestra & Choir, becoming choirmaster, music director, and principal conductor of the Great Radio Orchestra and Radio Choir in 1953. He became principal conductor of the Leipzig Symphony Orchestra & Choir in 1960. In 1977 he was named principal conductor of the Dresden Philharmonic, a post he held until 1985. From 1985 until his death he frequently appeared as guest conductor at the Dresden and Leipzig opera houses, the Staatsoper Berlin, and the NHK Orchestra, Tokyo. Teaching engagements included a professorship with the Mendelssohn Bartholdy Hochschule für Musik in Leipzig from 1975 until 1978, and a Dresden master class in 1980. Kegel’s grasp extended over the standard repertoire, from Bach to Stravinsky, though his center of interest revolved around the German Romantics, Bruckner and Mahler in particular, and the Modernists, great and minor — Hartmann, Honegger, or Theodorakis no less than Bartók, Berg, and Hindemith — with a smattering of such audience pleasers as Carmen and Margarethe (that is, Gounod’s Faust for German audiences). Several recordings — including Carmina Burana and Mahler’s Symphony No. 4 — feature distinguished solo work by Kegel’s second wife, soprano Celestina Casapietra. His manner was without affectation or grandiosity, rhythmically alert and lyrically poised, always efficient and often inspired. He committed suicide in Dresden on November 20, 1990. ~allmusicguide