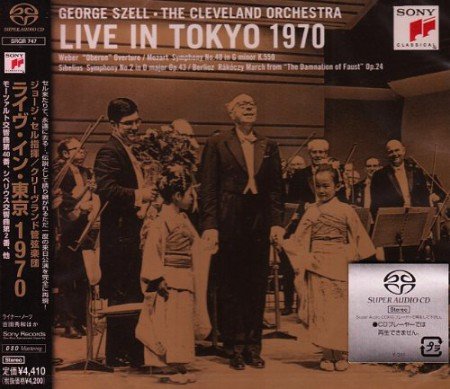 This 1970 concert, recorded live in Tokyo by NHK radio engineers, is the stuff of which legends are made. Already fatally ill with the cancer that would kill him two months later, George Szell led the orchestra he had nurtured since 1946 on a triumphant tour of the Far East, sharing the podium with Pierre Boulez, husbanding his strength, refusing to give in to increasing frailty and exhaustion. On the evening of May 22, he directed the program recorded here, and it remains arguably the single-most astonishingly perfect live performance ever captured by the microphones. This is all music that Szell conducted in the studio, and superbly well too. What, you already own those recordings? Never mind. The Oberon Overture has not been available in anything other than the Japanese Sony Szell Edition (in which this concert also features prominently), so its presence here is doubly welcome. The Mozart G minor Symphony should erase any notion of this conductor’s lack of flexibility. Yes, he was a severe disciplinarian, but his reputation tends to cloud people’s judgment (and clog their ears) when listening to the actual performances. This rendition thrives on subtle variations of pulse; Szell’s always-fresh way of introducing the upbeats to the principal theme whenever it returns offers one example, just as the unparalleled elegance (and yes, even playfulness) of phrasing throughout the slow movement provides another. Szell recorded a stellar Sibelius Second with the Concertgebouw for Philips, recently reissued in magnificently remastered sound. It has long been a version of reference for the work. This performance resembles the earlier one, interpretively speaking, but even the excellence of the Dutch orchestra cannot approach the ferocious virtuosity on display here. Start with the extraordinary energy and finely layered sonorities of the first movement’s central development section, and move on from there to the dazzling sectional interplay that ignites the second movement’s agitated climaxes (another classic example of Szell flexibly and fearlessly exploiting a huge range of tempo). By the time you reach the sizzling yet lighter-than-air strings in the scherzo (like Mravinsky/Leningrad at their peak, only with more colorful articulation), it should be clear that this performance sets a standard that remains unmatched to this day, technically and interpretively. Listen to the way Szell constructs the transition to the finale, and to its ideal mixture of Romantic expansiveness and structural solidity. The final climax rises out of the depths of the orchestra like a force of nature, a massive physical presence, and an incomparable musical experience. Berlioz’s Rákóczy March, the brilliantly played encore, is merely the icing on the cake.