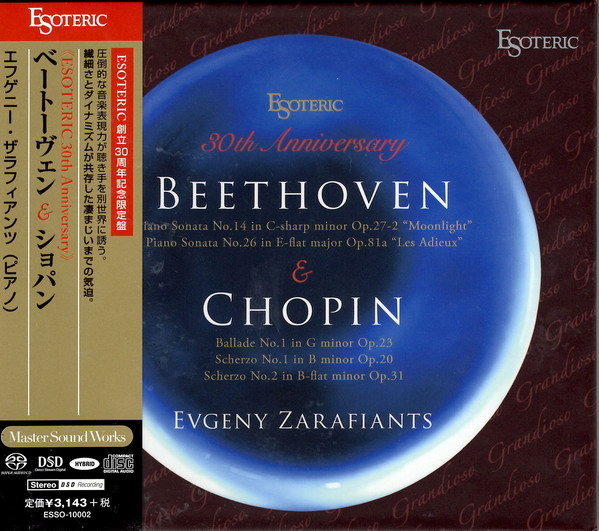 This recording of piano works is the third title from ESOTERIC label, produced by bringing together the knowhow of ESOTERIC and Octavia Records, with the goal being a high-quality DSD recording primarily targeting audiophiles. The resulting recording promises a new level of excitement by bringing to the listener not only high sound quality, but also the captivating musical power embodied in the original works themselves.

Evgeny Zarafiants was born in 1959 in Novosibirsk, Russia, and raised by musician parents. At the age of eight, he entered the Russia’s most prestigious Central Music School at the Moscow State Conservatory, where he received the elite education for musically gifted children. There he studied along with Mikhail Pletnev and Ivo Pogorelich, both of them his schoolmates. In 1975 he went on to study at the Gnessin State Musical College and later graduated with top honors from each of the following: the Orsk Music Academy, the Glinka Conservatoire and the Glinka Conservatoire Graduate School. During that time he won the prizes at numerous piano competitions including the All-Russian Piano Competition.
It was, however, in 1995 that he rose to international prominence after winning the second prize at the Pogorelich International Piano Solo Competition in Pasadena, California.
He then moved to Croatia to teach at Mirković Music Academy and the Music Academy of Zagreb and has staged numerous concerts since, mainly in Germany and Japan.
In 2004 he played Tchaikovsky’s Piano Concerto No.1 with the Russian Philharmonic Orchestra, in 2005 – Beethoven’s Piano Concerto No. 3 with the Prague Philharmonic Orchestra and in 2006 – Rachmaninov’s Piano Concerto No. 2 with the Zagreb Philharmonic Orchestra.
In 2007 he achieved a major success by staging the recital at the Tokyo Kioi Hall celebrating his ten year anniversary in Japan and by performing throughout Japan.
Over the last few years he has also held recitals at the Tokyo Bunka Kaikan Small Hall, Kobe Asahi Hall, Oji Hall and Gotanda Music Hall, all of which have been received with a great admiration.
The world of Evgeny Zarafiants is one of the tremendously beautiful resonance and the highly spiritual sound that deeply touches his listeners’ hearts and strikes the chord with his audience, thus adding even more to his reputation as “The Poet of the Piano”.