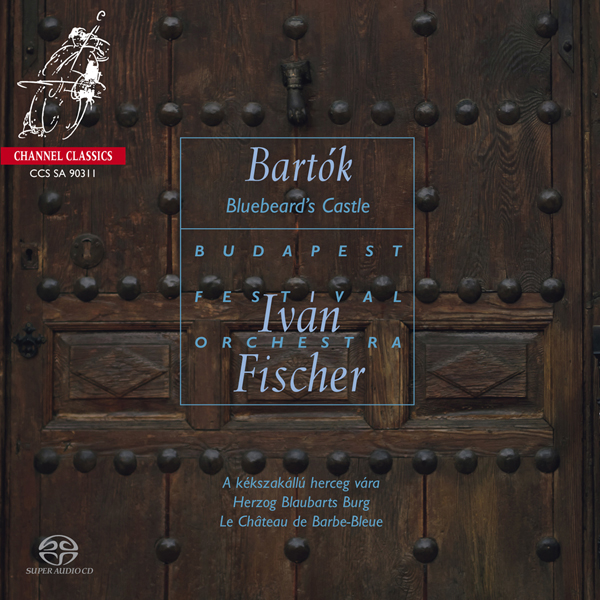 Despite occasional successful stagings of this opera, it is concert performances that stir up the feelings of audiences most. I have witnessed many times in performances of this psycho-drama that listeners, staring at the faces of the two singers for sixty minutes, or following a surtitled or printed libretto translation during Bartók’s deeply emotional music, were confronted with themselves. The prologue is very important; this is in fact a story about us. Usually, after the opera has ended, discussions break out, dividing men and women. Whereas everybody seems
to understand why Judit cannot resist her desire to open all the doors, Bluebeard’s character remains controversial. Is it right or wrong, necessary or unnecessary to keep certain doors closed? Why does he need to lock Judit up after she has discovered his secrets? Is the blood real, or does it exist only in Judit’s fearful imagination?
This Bluebeard is not a killer, even if he has a bad reputation and Judita sees blood everywhere. All the earlier wives are alive in his heart, behind closed doors. Bartók, who was himself a closed, shy man, seems to have been fascinated by strange-looking characters who turn out to feel endless love. This links Bluebeard to the Miraculous Mandarin.
I am very grateful to Mr Vikárius and Mr Somfai of the Bartók archive in Budapest, who drew my attention to a number of errors in the printed score which we have been able to correct in this new recording.
I also want to thank the Budapest State Opera, who lent us the very rare keyboard xylophone which gives the torture chamber scene its authentic colour. –Iván Fischer

This is an important re-release of a 2003 recording that originally appeared on Philips. Iván Fischer (who speaks the opera’s prologue quite beautifully and poetically) is certainly one of the preeminent Bartók conductors today, and this release fills out his discography of the composer’s works. Most of those other recordings still languish on Philips, but since other releases for that label have reappeared on Channel Classics, hopefully his previous Bartók titles will also.
Bluebeard’s Castle, as has often been said, employs three characters: Bluebeard, Judith, and the castle. Laszló Polgár is a magnificent Bluebeard: proud, dark-toned, steady throughout his range (after a somewhat edgy start), and very moving in his final apostrophe to his various wives. As Judith, Ildikó Komlósi has a powerful voice, which makes her emotional outbursts very exciting: her demands for the keys, for example, and the high C at the opening of the fifth door hold no terrors for her. But the basic timbre of the voice isn’t particularly attractive, and like so many singers today she has a vibrato that at times becomes distracting.
Fischer and his team, of course, portray the castle, as it were, and they are magnificent. The velvety strings at the opening, the spooky clarinets, the keyboard xylophone borrowed for this recording to capture the sound of Bluebeard’s armory–all are wonderfully evocative, and the playing and pacing are just about perfect. So is Channel Classics’ engineering, capturing plenty of detail while retaining ideal balances between the orchestra and the singers. I don’t know what they did to the original sonics, but the disc sounds much better now than it did back in 2003. This is a very fine recording, an important addition to the Bartók discography. Channel Classics provides the original Hungarian text plus an English translation. –David Hurwitz, ClassicsToday.com