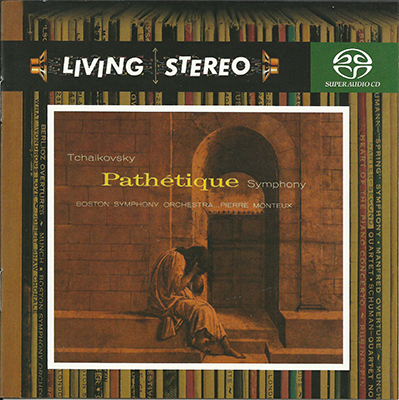 Pierre Monteux was one of those conductors who could make the most anguished music sound effortless. You might think that this isn’t an advantage in the Pathétique Symphony, but it is. His innate musicality keeps the allegro sections of the first movement pressing smartly forward, while the lyrical second subject never turns sticky. Other performances may be noisier, but Monteux’s cogency offers its own exciting and perfectly valid argument. Certainly no one would take issue with the idiomatic lilt he brings to the second-movement waltz, or with the rhythmic lift he provides in the ensuing march (this really is Tchaikovsky as his most French, isn’t it?). There have been more intense accounts of the finale, but the beautiful playing of the Boston Symphony and Monteux’s refusal to get hysterical remain all of a piece: it’s a very satisfying reading by any standard. The 1955 Living Stereo recording still sounds excellent both in stereo and on (two-channel) SACD, without a large enough difference between them to make a significant difference. This is a very welcome reissue. –David Hurwitz, ClassicsToday.com

Finally Pierre Monteux and the Boston Symphony Orchestra’s magnificent 1955 golden age stereo performance of Tchaikovsky’s Symphony No. 6 receives its rightful reissue. For too long RCA/BMG has placed the spotlight on the Reiner, Ormandy and Munch accounts of this work, making them the “Pathetique” representatives of choice for earlier “Living Stereo,” “Basic 100” and other budget-line series respectively. In all fairness, all three are quite good, and this Monteux 6th has been available on CD previously, with the composer’s 4th and 5th Symphonies on a two-disc set in the now out-of-print “Monteux Edition” volumes. But here, the first recording Monteux made in Boston gets the star treatment it deserves for its 50th Anniversary. I’ve only picked up a few of these new “Living Stereo” SACD Hybrids, but even on my decent stereo system (HK amp, Denon CD, Bose & Klipsch Spks) I can really tell a difference in sound separation and clarity. And last but certainly not least, thank you BMG for making these Hybrids so affordable! — sa-cd.net