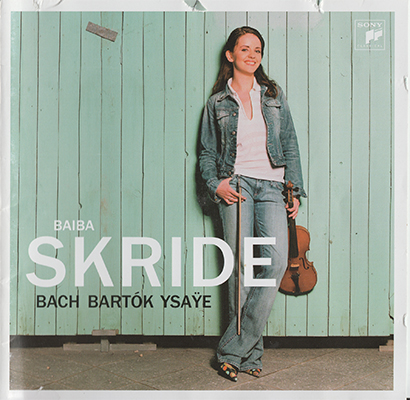 The Latvian violinist Baiba Skride won the 2001 Queen Elisabeth competition at the age of twenty. This is her debut recital for Sony, and probably the only SACD of her playing for the indefinite future, as her follow up has only been released on plain CD. She is an interesting complement to Sony’s long term house female violinist, Midori Goto. One wonders whether Skride was signed on to replace Hilary Hahn, who rather unwisely jumped raft to Universal.

It goes without saying that any new violinist who wins a recording contract possesses solid technique. Her tone production high up the stave is refreshing compared to Midori’s rather acerbic, even grating sounds ( most notably on the Sony CD/SACD release of the Mozart Sinfonia Concertante with Imai ), which even high resolution digital can only do so much to mitigate. On the basis of this disc, Skride’s tonal production is unlike fellow Latvian Gidon Kremer, who has a generally more wiry presentation, with greater flexibility in his bowing arm to produce a wider range of tonal shadings. Skride seems to lean more towards the Pinchas Zuckerman palette of rich but somewhat underinflected sound.
This disc is one of the most intelligently planned violin selections currently available. All are for unaccompanied violin, the opening Bach partita being the one with the famous Chaconne. Ysaÿe’s set of six solo sontas were published in 1924. The first, which is presented here, was dedicated to Szigeti, whose performances of Bach were renowned. This work’s four movement structure mimics the Bach solo violin sonatas. The Bartók has an opening chaconne, and was commissioned by Menuhin.
There is evidence of some sloppiness in Sony’s production values. This disc is claimed to be a ‘Co-production with DeutschlandRadio Berlin’. It is unclear whether this was actually recorded by the radio station for broadcast, and later bought up by Sony, as there is no multichannel layer. Skride is recorded very close to the microphones. This leads in stereo to the violin image being stretched beyond credibility between the speakers. The violin sounds at or in front of the level of the speakers, with little sense of depth. It sounds even closer than the sound RCA accorded Heifetz for his stereo concerto and mono Bach recordings! It is entirely to the fiddler’s credit that there isn’t more harsh grating when the bow hits the string. There is no detail as to the recording, which, based on the edge to the high notes sounds no better than 24bit/48 kHz PCM.
Sony have proved laudably immune to Skride’s looks, restraining themselves to only 1.7 photographs of her. This is in marked contrast to the soft core sex romp that the Universal art directors subject their artists to, with the exception of Thomas Quasthoff. In fact, for the back of the booklet, Sony prefers to show a shuttered window rather than her face. Thankfully there is no close-up of her shoes, which appear to have escaped from a Damien Hirst spot painting. There is a colour photo of her 1708 Strad, and very nicely varnished it looks.
The Bach partita sounds quite different from Julia Fischer’s complete set. However, in large measure this is due to the different recording styles. Compare the two, and one appreciates the beautiful sound PentaTone commissioned for Fischer, who plays inside a supportive acoustic. Fischer has a slower and more gracious sarabande. Skride has a massive chaconne which is a good half a minute slower than Fischer, who doesn’t exactly zip through it herself. The only slower chaconne than Skride’s I know of is Ida Haendel’s. Fischer’s performance of the entire partita sounds more dance like, whereas Skride is powerful and deliberate, though to her credit the entire performance is impressive in its monumentality rather than turgid. Neither player has any intonation problems, although artistically one can’t say the Chaconne in either of their hands is on the same exalted level as Grumiaux, Menuhin, Heifetz, Szigeti, or Perlman. In large measure the reason is the same for both, where the brief bridging passages which lead from one variation to the next aren’t inflected with the slight but telling changes in tempo or bow strength which lead to the sensation of cumulative musical growth. Skride’s default mechanism for delivering architectural vision is ‘play loud-loud-louder’, which isn’t quite the same concept of continuity.
As I don’t know the Ysaÿe work, I’ll refrain from comment, except to say her performance is consistent in style and execution to the Bach, but as there are fewer compositional moments of magic, Skride’s confident and broad brush manner sounds exactly appropriate. The tough and elusive Bartók is the highlight, where the close bordering on oppressive sound adds rather than detracts from the music and performance style. Her timings for the four movements are : 10’16, 4’49, 7’30 and 5’12. These are mentioned because when Menuhin played it for the composer, he revised the estimated performance length to 24 minutes. Nigel Kennedy’s version is even slower than Skride’s. The couple of times I’ve heard this live, both fiddlers from memory appeared to take the piece at a faster clip than Skride. Her performance is full-blooded, monumental rather than folksy or witty the way Menuhin inflected certain passages whilst he still retained the overall sensation of Bachian dignity. The hushed ‘night music’ opening to the final presto doesn’t steal into the consciousness because of the close recording. Nevertheless, an impressive performance which I found more idiomatic than Kennedy’s.
Copyright © 2006 Ramesh Nair and SA-CD.net