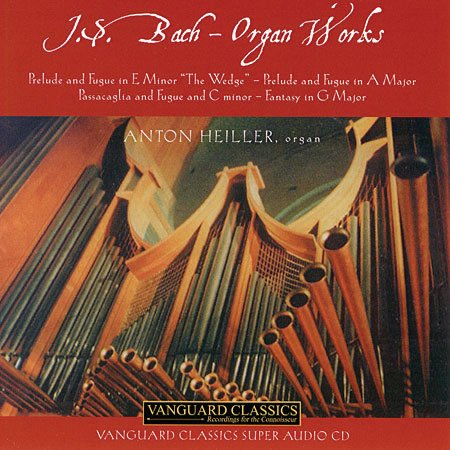 Anton Heiller (1923-1979) was one of the great organists of his time. He was also renowned as a keyboard improviser in the tradition of Bach himself, as evidenced in many of the recordings he made for Vanguard Classics.

Vanguard Classics remade this collection of organ warhorses from J.S. Bach (1675-1750) in 2004, redoing their earlier failed stereo collection that originally included the Bach warhorse of all warhorses, the Tocatta and Fuuge in D minor BWV 565. Thankfully, Vangauard left it out of this collection.

The Austrian organist Anton Heiller made this recording on Vangaurd HM 73 and it was also issued as Bach Guild BGS-70675. For the performance on this recording, he selected the organ at the St. Mary Church in Helsingborg in Sweden. It was previously available on CD in the Organ Works by Bach and other recordings of variable quality. This version is the best-sounding one yet, produced by Artemus Records, which purchased the Vanguard Classics line from Omega Records in 2003. A lengthy discussion on this is included in the well-written but difficult to read seven pages of notes that accompany this issue.