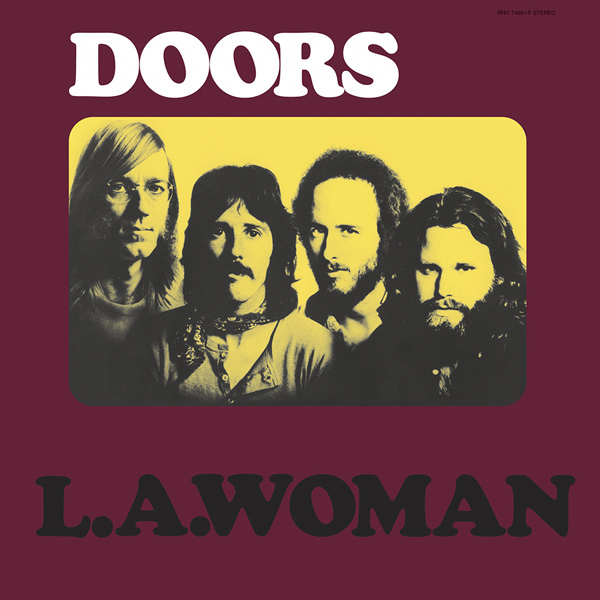 The title track from this, the last Doors album recorded with Jim Morrison, who died shortly after it was released, has, said one reviewer, “maybe the best Chuck Berry riffs since the Stones.” And that’s not even mentioning “Love Her Madly,” which became one of the highest charting hits for The Doors.
“Love Her Madly,” was written by Doors guitarist Robbie Krieger, who is said to have penned the song about the numerous times his girlfriend threatened to leave him.  The song peaked at No. 11 on the Billboard Hot 100 singles chart  and reached No. 3 in Canada.
L.A. Woman was still high on the charts when, like in the lyric “actor out on loan” of its closing track — the celebrated “Riders on the Storm,” Jim Morrison died in a Paris bathtub in the summer of 1971.
Via such tracks as “The Changeling,” “Crawling King Snake,” and the frothy, rollicking title track, the collection leaned heavily toward the Blues — in particular, Morrison’s boastful “Lizard King” brand of it. All-in-all, Rolling Stone proclaimed L.A. Woman, “The Doors’ greatest album, including their first,” and “A landmark worthy of dancing in the streets.”
Analogue Productions and Quality Record Pressings are proud to announce that six studio LP titles — The Doors, Strange Days,Waiting For The Sun, Soft Parade, Morrison Hotel and L.A. Woman —  are featured on 200-gram vinyl, pressed at 45 rpm. All six are also available on Hybrid Multichannel SACD! All were cut from the original analog masters by Doug Sax, with the exception of The Doors, which was made from the best analog tape copy.

The final album with Jim Morrison in the lineup is by far their most blues-oriented, and the singer’s poetic ardor is undiminished, though his voice sounds increasingly worn and craggy on some numbers. Actually, some of the straight blues items sound kind of turgid, but that’s more than made up for by several cuts that rate among their finest and most disturbing work. The seven-minute title track was a car-cruising classic that celebrated both the glamour and seediness of Los Angeles; the other long cut, the brooding, jazzy “Riders on the Storm,” was the group at its most melodic and ominous. It and the far bouncier “Love Her Madly” were hit singles, and “The Changeling” and “L’America” count as some of their better little-heeded album tracks. An uneven but worthy finale from the original quartet. –AllMusic Review by Richie Unterberger