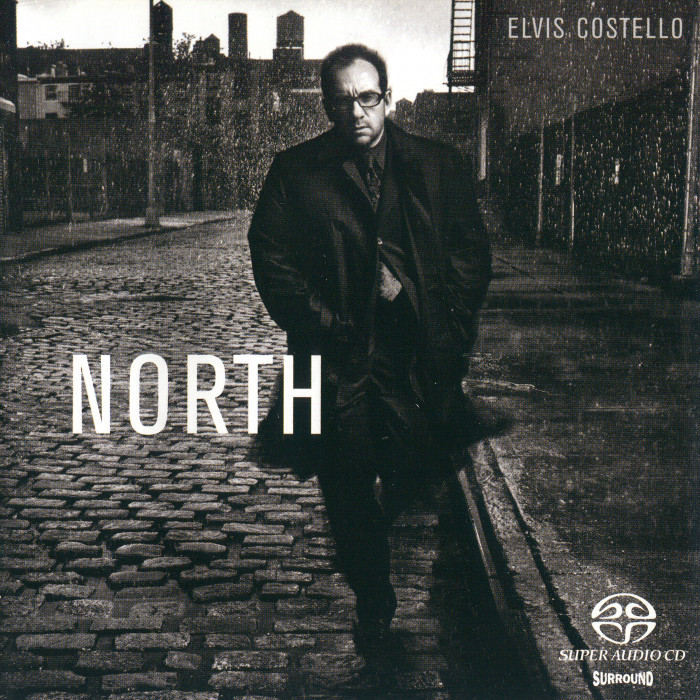 North, Elvis Costello’s 20th album of new material, follows the deliberately classicist When I Was Cruel by a mere year, but it feels more the sequel to 1998’s Burt Bacharach collaboration, Painted From Memory, or even 1993’s roundly ignored classical pop experiment, The Juliet Letters. Costello has abandoned clanging guitars and drums of Cruel — abandoned rock & roll, really — to return to a set of classically influenced songs, all “composed, arranged and conducted” by the man himself (on The Juliet Letters, he was merely the composer and voice). The songs on North are pitched halfway between traditional torch ballads and arty contemporary Broadway writers such as Stephen Sondheim. This isn’t so much a shift in direction after When I Was Cruel as much as it is an extension of the Bacharach album (in this context, Cruel seems like the aberration), but it’s also a reflection of Costello’s new love for Canadian jazz singer Diana Krall. It’s not just that North is somewhat of a song cycle, starting with the despair of a failed relationship and ending with the hope of a new love, but that it’s somewhat written in the style of Krall’s music: self-consciously sophisticated and slightly jazzy. Ultimately, North is not jazz-pop; it’s classical pop, with Costello more interested in the structure, arrangement, and words of the song rather than mere catchiness. It’s a very writerly album, in regards to both the music and lyrics. Consequently, it takes a bit of effort to get into the album, since it purposefully lacks hooks and songs as immediate or tuneful as those on Painted From Memory or “Jacksons, Monk and Rowe” from The Juliet Letters. This is not a flaw, per se — it’s simply what the album is, a collection of subtle songs performed with an elegant understatement. Unlike The Juliet Letters, North never feels like an exercise, nor does it feel like Costello has something to prove. It’s a specific, personal album with serious ambitions that it fulfills. If the album ultimately winds up being something to listen to on occasion rather than a record to spin repeatedly, that doesn’t make Costello’s achievement with this song cycle any less admirable.