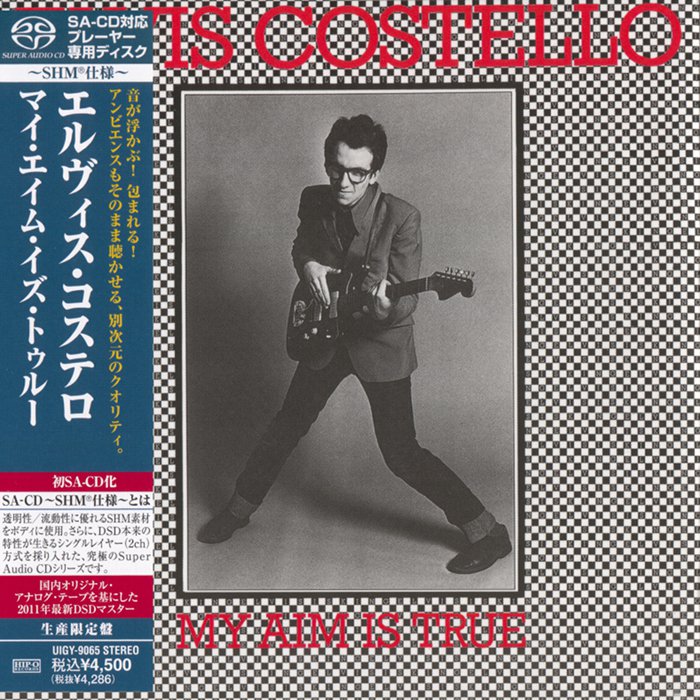 Uses the 2011 DSD master based on Japanese original analog tape. Reissue features the high-fidelity SHM-SACD format (fully compatible with standard SACD player, but it does not play on standard CD players). DSD Transferred by Manabu Matsumura.

Elvis Costello was as much a pub rocker as he was a punk rocker and nowhere is that more evident than on his debut, My Aim Is True. It’s not just that Clover, a San Franciscan rock outfit led by Huey Lewis (absent here), back him here, not the Attractions; it’s that his sensibility is borrowed from the pile-driving rock & roll and folksy introspection of pub rockers like Brinsley Schwarz, adding touches of cult singer/songwriters like Randy Newman and David Ackles. Then, there’s the infusion of pure nastiness and cynical humor, which is pure Costello. That blend of classicist sensibilities and cleverness make this collection of shiny roots rock a punk record — it informs his nervy performances and his prickly songs. Of all classic punk debuts, this remains perhaps the most idiosyncratic because it’s not cathartic in sound, only in spirit. Which, of course, meant that it could play to a broader audience, and Linda Ronstadt did indeed cover the standout ballad “Alison.” Still, there’s no mistaking this for anything other than a punk record, and it’s a terrific one at that, since even if he buries his singer/songwriter inclinations, they shine through as brightly as his cheerfully mean humor and immense musical skill; he sounds as comfortable with a ’50s knockoff like “No Dancing” as he does on the reggae-inflected “Less Than Zero.” Costello went on to more ambitious territory fairly quickly, but My Aim Is True is a phenomenal debut, capturing a songwriter and musician whose words were as rich and clever as his music.