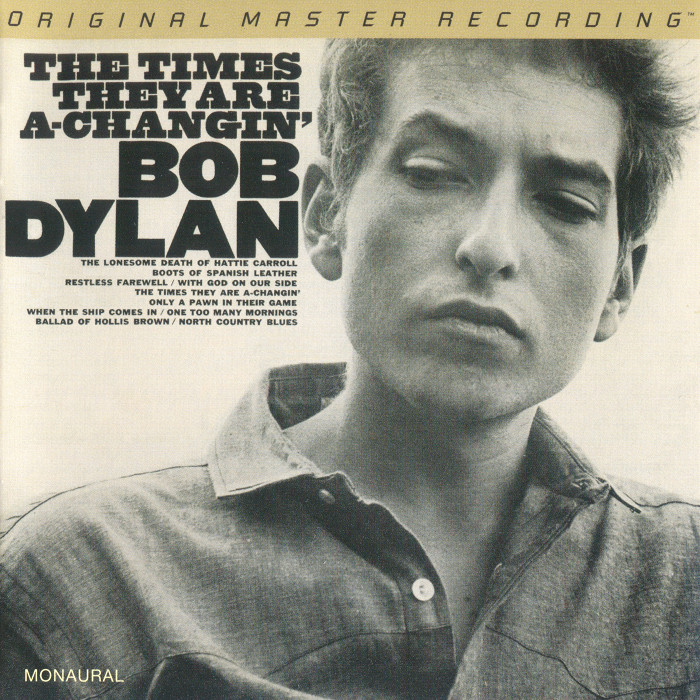 If The Times They Are a-Changin’ isn’t a marked step forward from The Freewheelin’ Bob Dylan, even if it is his first collection of all originals, it’s nevertheless a fine collection all the same. It isn’t as rich as Freewheelin’, and Dylan has tempered his sense of humor considerably, choosing to concentrate on social protests in the style of “Blowin’ in the Wind.” With the title track, he wrote an anthem that nearly equaled that song, and “With God on Our Side” and “Only a Pawn in Their Game” are nearly as good, while “Ballad of Hollis Brown” and “The Lonesome Death of Hattie Carroll” are remarkably skilled re-castings of contemporary tales of injustice. His absurdity is missed, but he makes up for it with the wonderful “One Too Many Mornings” and “Boots of Spanish Leather,” two lovely classics. If there are a couple of songs that don’t achieve the level of the aforementioned songs, that speaks more to the quality of those songs than the weakness of the remainder of the record. And that’s also true of the album itself – yes, it pales next to its predecessor, but it’s terrific by any other standard.

Tracklist:
01. The Times They Are A-Changin’
02. Ballad Of Hollis Brown
03. With God On Our Side
04. One Too Many Mornings
05. North Country Blues
06. Only A Pawn In Their Game
07. Boots Of Spanish Leather
08. When The Ship Comes In
09. The Lonesome Death Of Hattie Carroll
10. Restless Farewell