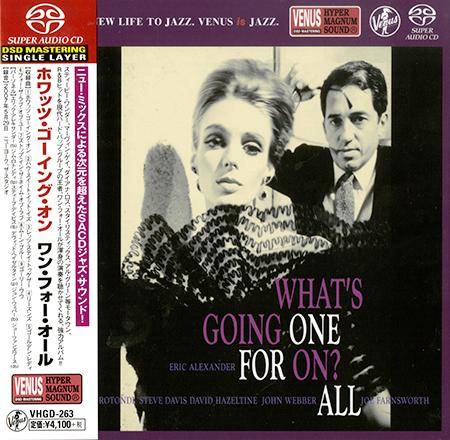 Rock-solid work from One For All, easily one of the greatest straight jazz combos going, thanks to some tremendous tenor work from Eric Alexander, sweet piano work from David Hazeltine, and snapping rhythms from drummer Joe Farnsworth. The sextet also features Jim Rotondi on trumpet, Steve Davis on trombone, and John Webber on bass, all working here at the height of their powers, and also coming across with a bit more sharpness and soul than even other recent sessions on the Venus label. Arrangements are by all members of the group; the tunes are long and roll out beautifully with a solidly soulful feel — no surprise, given that most of them are covers of classic soul tunes from the ’70s.

One for All is an ongoing all-star band that regularly meets for record dates, though almost all members of the sextet lead individual groups of their own. The focus of this session is soul music, though not in the context one would expect to hear it. Trumpeter Jim Rotondi’s recasting of Marvin Gaye’s protest song “What’s Going On?” transforms the piece from a rather repetitious, irritating anthem into a brilliant post-bop vehicle, with sizzling solos and terrific ensembles. Tenor saxophonist Eric Alexander utilizes a similar method in his recasting of Al Green’s “Let’s Stay Together” with equal success. Pianist David Hazeltine contributed several arrangements, including a snappy Latin-flavored setting of Stevie Wonder’s “Golden Lady” and a soulful yet upbeat chart of “Betcha by Golly, Wow,” the latter a hit for a number of different artists. Trombonist Steve Davis adds a Latin flavor to his pulsing take of “Stop! In the Name of Love,” a huge hit for the Supremes. Even jazz fans who aren’t particularly connoisseurs of soul music will find much to like in this enjoyable release.