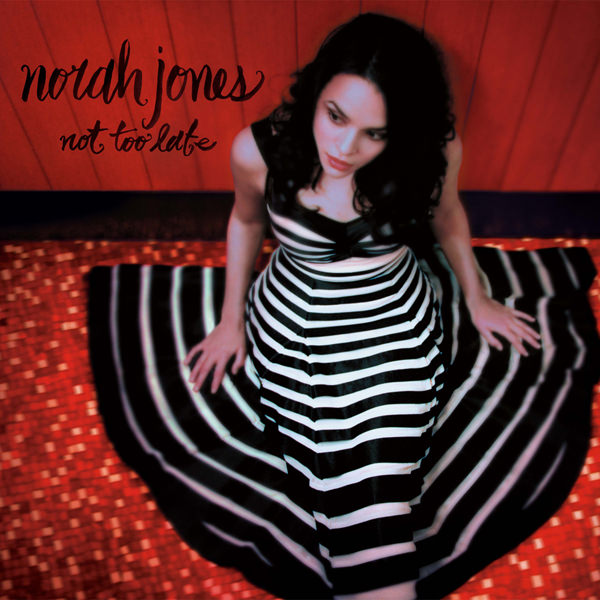 Norah Jones’ third studio album, Not Too Late, is an understated masterpiece from one of music’s greatest singer/songwriters. The album follows the success of her first two albums, Come Away with Me and Feels Like Home, which combined have sold over 27 million copies worldwide. The album, which features only self-penned material, finds Jones branching out and developing her signature crooner sound. The album highlighted by her extraordinary artistic growth is eloquently sung and immaculately performed. The outing topped Billboard’s Top 200 and featured the hit single, “Thinking About You.” This transitional effort is easily one of her most compelling and personal albums to date.

Recoils from fame usually aren’t as subdued as Norah Jones’ third album, Not Too Late, but such understatement is customary for this gentlest of singer/songwriters. Not Too Late may not be as barbed or alienating as either In Utero or Kid A — it’s not an ornery intensification of her sound nor a chilly exploration of its furthest limits — but make no mistake, it is indeed a conscious abdication of her position as a comfortable coffeehouse crooner and a move toward art for art’s sake. And, frankly, who can blame Jones for wanting to shake off the Starbucks stigmata? Although a large part of her appeal has always been that she sounds familiar, like a forgotten favorite from the early ’70s, Jones is too young and too much of a New York bohemian to settle into a role as a nostalgia peddler, so it made sense that she started to stretch a little after her 2004 sophomore set, Feels Like Home, proved that her surprise blockbuster 2002 debut, Come Away with Me, was no fluke. First, there was the cabaret country of her Little Willies side band, then there was her appearance on gonzo art rocker Mike Patton’s Peeping Tom project, and finally there’s this hushed record, her first containing nothing but original compositions. It’s also her first album recorded without legendary producer Arif Mardin, who helmed her first two albums, giving them a warm, burnished feel that was nearly as pivotal to Jones’ success has her sweet, languid voice. Mardin died in the summer of 2006, and in his absence, Jones recorded Not Too Late at the home studio she shares with her collaborator, bassist and boyfriend Lee Alexander. Although it shares many of the same sonic characteristics as Jones’ first two albums, Not Too Late boasts many subtle differences that add up to a distinctly different aesthetic. Jones and Alexander have stripped Norah’s music to its core. Gone are any covers of pop standards, gone are the studio pros, gone is the enveloping lushness that made Come Away with Me so easy to embrace, something that Not Too Late is most decidedly not. While this might not have the rough edges of a four-track demo, Not Too Late is most certainly music that was made at home with little or no consideration of an audience much larger than Jones and Alexander. It’s spare, sometimes skeletal, often sleepy and lackadaisical, wandering from tunes plucked out on acoustic guitars and pianos to those with richer full-band arrangements. Norah Jones has never exactly been lively — part of her charm was her sultry slowness, ideal for both Sunday afternoons and late nights — but the atmosphere here is stultifying even if it’s not exactly unpleasant. After all, unpleasantness seems to run contrary to Jones’ nature, and even if she dabbles in Tom Waits-ian carnivalesque stomps (“Sinkin’ Soon”) or tentatively stabs at politics (“My Dear Country”), it never feels out of place; often, the shift is so subtle that it’s hard to notice. That subtlety is the biggest Achilles’ heel on Not Too Late, as it manifests itself in songs that aren’t particularly distinctive or performances that are particularly varied. There are exceptions to the rule and they all arrive with full-band arrangements, whether it’s the lazy jazz shuffle of “Until the End,” the country-tinged “Be My Somebody,” or the wonderful laid-back soul of “Thinking About You.” These are songs that not only sound full but they sound complete, songs that have a purposeful flow and are memorable for both their melody and sentiment. They would have been standouts on Feels Like Home, but here they are even more distinctive because the rest of the record plays like a sketchbook, capturing Jones and Alexander figuring out how to move forward after such great success. Instead of being the end result of those experiments, the completed painting after the sketch, Not Too Late captures their process, which is interesting if not quite compelling. But its very release is a clear statement of artistic purpose for Jones: its ragged, unfinished nature illustrates that she’s more interested in pursuing her art than recycling Come Away with Me, and if this third album isn’t as satisfying as that debut, it nevertheless is a welcome transitional effort that proves her artistic heart is in the right place. –Stephen Thomas Erlewine