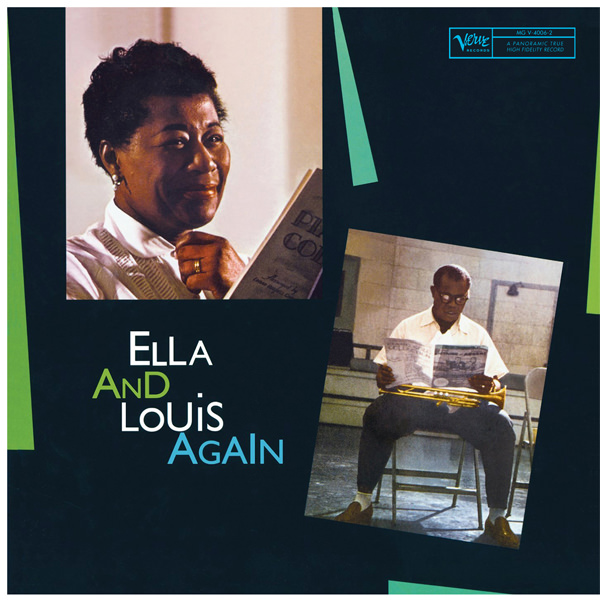 There isn’t much one can say about an album whose title is Ella And Louis Again. The “again” obviously means they’ve already done one album together and beyond that, what can you say about two people like Ella and Louis? I doubt that there’s anyone today who loves music, who doesn’t know Ella Fitzgerald and Louis Armstrong. The backing, with the Oscar Peterson Trio and Louis Bellson substituting for Buddy Rich, remains, as in the first album, quiet, discreet, swinging.

Recorded in 1957, Ella & Louis Again re-teams Ella Fitzgerald and Louis Armstrong after the success of their first album and a popular series of concerts at the Hollywood Bowl the previous year. Stylistically, Fitzgerald and Armstrong had very different histories; he started out in Dixieland before branching out into classic jazz and swing, whereas Fitzgerald started out as a swing-oriented big-band vocalist before becoming an expert bebopper. But the two of them have no problem finding common ground on Ella & Louis Again, which is primarily a collection of vocal duets (with the backing of a solid rhythm section led by pianist Oscar Peterson). One could nitpick about the fact that Satchmo doesn’t take more trumpet solos, but the artists have such a strong rapport as vocalists that the trumpet shortage is only a minor point. Seven selections find either Fitzgerald or Armstrong singing without the other, although they’re together more often than not on this fine set. –AllMusic Review by Alex Henderson