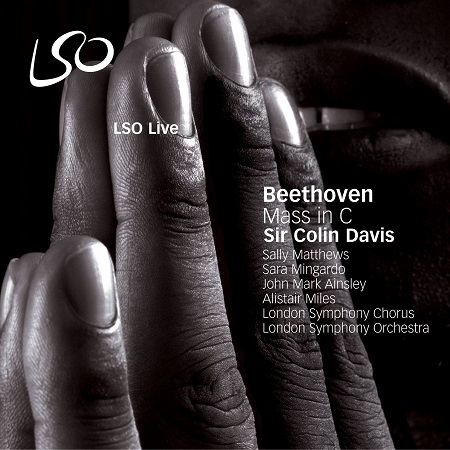 It’s not clear exactly what the “live” component is in this disc from the London Symphony Orchestra’s LSO Live series. The Beethoven Mass in C major, Op. 86, & the “Prisoners’ Chorus” from Fidelio are specified as having been recorded live on 2 different occasions at London’s Barbican concert hall, but if there was an audience any traces of its existence have been very carefully edited out. The performance, however, has the positive tension associated with a successful live performance, as well as the occasional flaws. Colin Davis, nearly 80 when the recording was made, turns in a fine interpretation of the work that was called “unbearably ridiculous & detestable” by Prince Nikolaus Esterhбzy II, patron of the aged Haydn & the commissioner, as well as of his 6 late masses. A good performance of the mass will get at why the prince didn’t like it: it fits the model of the late Haydn masses, but, at every point where Haydn went for confident, crowd-pleasing moves, it takes on an interior quality. The music has to have both a festive tone & the personal feel that distinguishes almost all of Beethoven’s music. Davis delivers the right kind of contrast, a bit splashy, yet with conviction in the big fugues & the rather unorthodox layout of the Credo. He is helped by a stellar quartet of soloists, most notably the fabulous Italian alto Sara Mingardo. The pairing with the “Prisoners’ Chorus,” although it wasn’t part of the original concert, is an intelligent stroke: Davis shows the connections between the Mass in C major & Fidelio, both of which kept Beethoven away from his customary sonata forms but which contained deep personal statements nevertheless. A very strong candidate for any buyer wanting a 1st copy of Beethoven’s 1st mass setting.