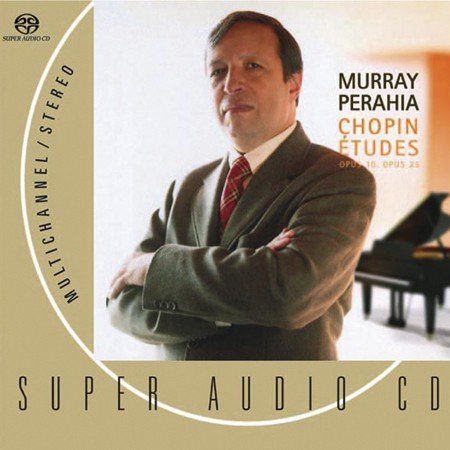 In a field in which each season heralds the arrival of new “talents” who are soon forgotten, pianist Murray Perahia has remained a reliable and immensely gifted presence on the international scene for more than four decades, despite long breaks away from performing. Perahia studied with Jeanette Haien, from the age of five until well into his teens. In 1964 he entered the Mannes College of Music in New York, studying composition and conducting; though both endeavors remained secondary to his career as a pianist, the latter proved particularly useful when, decades later, Perahia conducted and recorded a complete cycle of Mozart’s piano concerti from the keyboard. Perahia pursued further piano studies with Artur Balsam and Mieczyslaw Horszowski. He also attended the Marlboro Festival in Vermont, collaborating with such artists as Rudolf Serkin, Pablo Casals, and the Budapest Quartet.

In 1968 Perahia made his Carnegie Hall debut to much acclaim, and his concert career blossomed in short order. He made headlines in 1972 by taking top honors at the prestigious Leeds Piano Competition, the first American to do so — and, no less, by unanimous decision. This led to his London recital debut at Queen Elizabeth Hall in 1973. Later that year he appeared at the Aldeburgh Festival, where he worked closely with the festival’s founders, Benjamin Britten and Peter Pears. After Britten’s declining health made it impossible for him to continue as Pears’ accompanist, Perahia became one of Pears’ frequent and favorite recital partners. Perahia also became co-artistic director of the Festival from 1981-1989. In 1975 Perahia shared with cellist Lynn Harrell the first Avery Fisher Prize, intended to aid in the development of the most promising American musical careers.

Perahia is often described as a “musician’s musician,” one who does not adopt a virtuoso persona, but performs with a distinctive directness, without exaggerated or demonstrative gestures. His playing is clean and meticulous, his sound cool, transparent, sparkling, and exquisitely shaded. He is best known for his performances of Classical and early Romantic repertoire; from the late 1990s he developed an especial reputation as an interpreter of Bach. In 2000, his recording of Bach’s Goldberg Variations was awarded two Grammy nominations.

A hand injury and resulting infection have caused Perahia to step away for the stage for extended periods during his career, but his popularity has been sustained largely through his catalogue of recordings. He signed an exclusive contract with CBS Masterworks in 1973 and has remained with that label through its corporate transformation into Sony Classical. His recordings have received numerous accolades, including multiple Grammys and Gramophone Awards. In addition to his Mozart cycle, he has recorded all five Beethoven piano concerti with Bernard Haitink and the Concertgebouw Orchestra, as well as Schumann’s complete works for piano and orchestra. Perahia became president the Jerusalem Music Center in 2009, still finding time to record more Bach, Beethoven, and Brahms solo works.