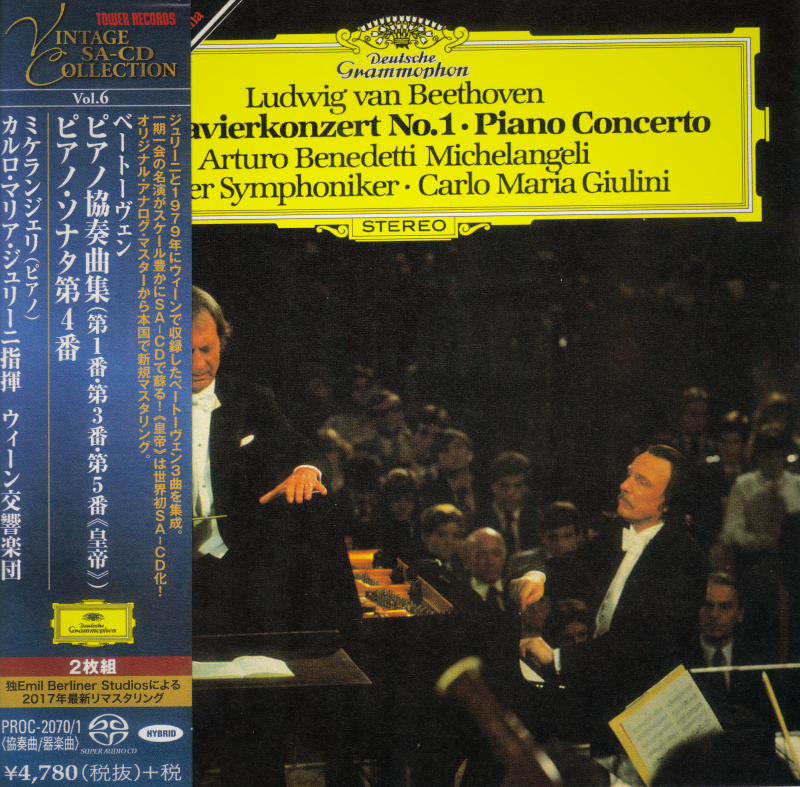 Considered one of the greatest pianists of the twentieth century, the Italian classical pianist Arturo Benedetti Michelangeli with Vienna Symphony Orchestra (Wiener Symphoniker), conducted by Carlo Maria Giulini, performs Ludwig van Beethoven’s Piano Concertos Nos. 1, 3 & 5 and Piano Sonata No. 4 on this Japanese double-disc compilation. These famous performances come back to life with SACD format. Some of the recordings is the world’s first SACD premier. Features all new mastering in the home country from the original analog master.

The three concerto recordings of Piano Concertos Nos. 1, 3 & 5, which were realized in Vienna in the form of a special concert for television broadcasting in 1979, occupy a special position among Michelangeli’s regular recordings, which are rare. Due to the fact that there are few concerto recordings, and because it is live here, the presence and the atmosphere of the audience as if they were there were superb due to the excellent final recording of analog recording by DG at that time. Listen this SACD, you will be surprised at the realism of the live performance. With a DSD sound source that has excellent overtone richness and reproducibility of the sound field, it can be said that such a live is more easily transmitted to the listener. In this reprint, we mixed the new 16-channel multi-track from the first generation and then remixed it into 2 channels. It is commercialized through high-quality digitalization and careful mastering. In the past, only the first and third commercial SACD single layers have been released, so the world’s first SACD conversion is only 2 songs of DISC 2, but DISC 1 is also new in accordance with this reprint.

We have coupled 3 pieces of concerto from 1979 and 2 pieces of Piano Sonata No. 4 which was released as a session recording in 1972. The performance is first of all finely supported by Giulini, and the optimal accompaniment with Michelangeli’s intentions further enhances the artistic perfection of these performances. It is a masterpiece that the beautiful reverberation after the touch of the piano that rises up to every corner of the venue, the rich reverberation of Musik Felinezal, and the atmosphere of the breathtaking audience are mixed and reproduced by the speaker, It is a sound source that we also recommend for many audio files. In producing this board, after performing physical maintenance and restoration of the original analog master tape of the home country, high-quality digitization (PCM) was performed, and the label dedicated engineer in the home country meticulously processes for this series took the time to do the mastering work. In addition, in this reprint, the applause before and after the concert recorded on the original analog master tape and the afterglow between movements are also reproduced.