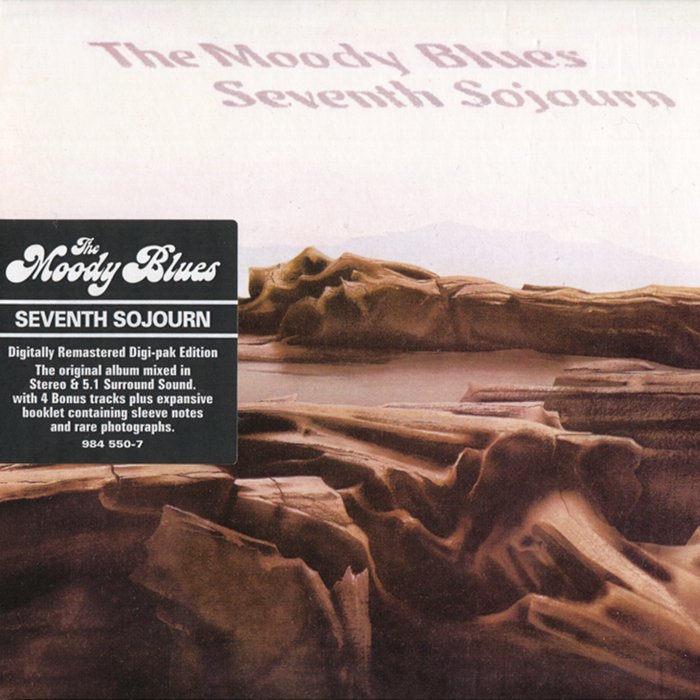 Despite the presence of a pair of ballads — one of them (“New Horizons”) by Justin Hayward the latter’s most romantic number since “Nights in White Satin” — Seventh Sojourn was notable at the time of its release for showing the hardest-rocking sound this band had ever produced on record. It’s all relative, of course, compared to their prior work, but the music is comparatively stripped down here, and on a lot of it Graeme Edge’s drumming and John Lodge’s bass work comprise a more forceful and assertive rhythm section than they had on earlier records, on numbers such as “Lost in a Lost World,” “You and Me,” and “I’m Just a Singer (In a Rock & Roll Band).” The latter, authored by Lodge, was — along with Lodge’s “Isn’t Life Strange” — one of two AM radio hits that helped drive the sales of this album, issued in early November of 1972, past all previous levels. Indeed, it was with the release of this album that the Moodies achieved their great commercial success in America and around the world, with a “Grand Tour” that kept them on the road for much of the year that followed. The irony was that it was all about to end for them, for years to come, and the signs of it were all over this record — Seventh Sojourn took a long time to record, and a lot of the early work on it had to be junked (“Isn’t Life Strange” was one of the few early songs to get completed); it was clear to all concerned except the fans that, after six years of hard work in their present configuration, they all needed to stop working with each other for a time, and this was clear in the songs — many have a downbeat, pensive edge to them, and if they reflected a questioning attitude that had come out on recent albums, the tone of the questioning on songs like “Lost in a Lost World,” “You and Me,” and “When You’re a Free Man” had a darker, more desperate tone. Perhaps the group’s mostly youthful, collegiate audience didn’t notice at the time because it fit the mood of the times — the album hit the stores in America the day before Richard Nixon’s landslide presidential re-election victory (the culmination of events behind the scenes that would subsequently drive him from office). But the members were not working well together, and this would be the last wholly successful record — difficult as it was to deliver — that this lineup of the band would record, as well as the last new work by the group for over five years. And oddly enough, even amid the difficulties in getting it finished, Seventh Sojourn would offer something new in the way of sounds from the group — Michael Pinder, in particular, introduced a successor to the Mellotron, with which he’d been amazing audiences for six years, in the form of the Chamberlain, which is all over this album.