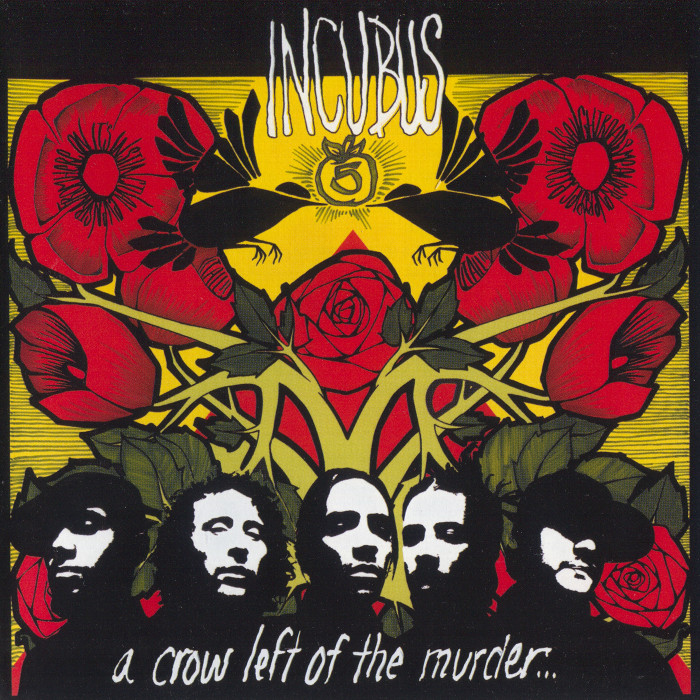 A Crow Left of the Murder… is the fifth studio album by the American rock band Incubus. The music of album incorporates elements of art rock, alternative metal, jazz, pop and progressive rock. Kicking in like a compellingly acrimonious version of Rush (“Megalomaniac”) before meandering through what can rather uncomfortably be termed noodly, time-signature lottery jazz-metal terrain A Crow Left of Murder probably identifies Incubus as the average Pearl Jam fan’s second-choice for chin-stroking mosh action. Brendon O’Brien (Soundgarden, Pearl Jam) produces and singer Brandon Boyd possibly fancies himself as a bit of a Vedder-esque sage, even blustering “My secret arsenal is an infinite ageless ink well” on the otherwise acceptable metal squawk of “Pistola”.

At the beginning of their career, Incubus was rightly lumped in with the legions of post-Korn alt metal/rap-rock bands swarming America in the latter days of the 20th century. But by their third album, 1999’s Make Yourself, they had separated from the pack, as indicated by the presence of producer Scott Litt, best-known for his work with R.E.M.. It signaled that the band was serious, and they began expanding their rap-metal template on that album and its follow-up, 2001’s Morning View, completing their transition from juvenelia to maturity with 2003’s Crow Left of the Murder. Switching from Litt to producer Brendan O’Brien, a man who has been with Pearl Jam longer than any of their drummers, Incubus has opted for a clean, crisp yet heavy sound which allows them to aggressively switch from crunching metallic riffs to jazzy prog interludes. It’s an expansive musical vision charged with some righteous anger; although vocalist Brandon Boyd doesn’t write explicit protests, there sure are enough allusions to social turbulence to make this the first politically aware alt metal album in many a year. This maturation is even more evident in the music, how the band actually swings on “Zee Deveel,” or how guitarist Michael Einzinger’s jazz-influenced solos seem both carefully constructed and casually tossed off, or how Boyd’s voice shifts from song to song (or during a song, as on the opening “Megalomaniac,” which sounds like a bizarre blend of Mr. Mister’s Richard Page and John Lydon). All this maturation does mean that Incubus may shed some older fans, since the naked ambitions on this record are far removed from the earnest, angst-ridden earlier records, but so be it – A Crow Left of the Murder… is far more interesting than any of their other records, or their peers’. At times, they may stretch themselves a little too far here, but the ambition is admirable and the achievements are tangible – a real breakthrough for the band.