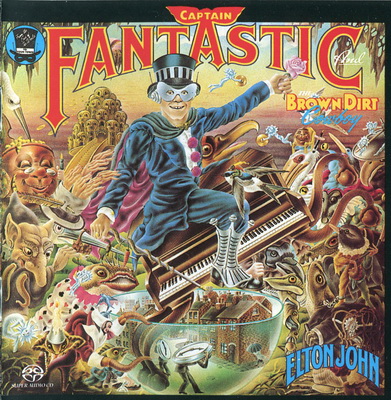 Captain Fantastic and the Brown Dirt Cowboy is the ninth studio album by British singer/musician Elton John. It debuted at number 1 on the U.S. Pop Albums chart, the first album ever to do so, and stayed there for seven weeks. It was certified gold in May 1975 and was certified platinum and 3x platinum in March 1993 by the RIAA. In Canada, it also debuted at number 1 on the RPM national Top Albums chart and only broke a run of what would have been fifteen consecutive weeks at the top by falling one position to number 2 in the ninth week. On the UK Albums Chart, it peaked at # 2. In 2003, the album was ranked number 158 on Rolling Stone magazine’s list of the 500 greatest albums of all time. This was the last album until Too Low For Zero that Elton John and his classic band would play together.

Sitting atop the charts in 1975, Elton John and Bernie Taupin recalled their rise to power in Captain Fantastic and the Brown Dirt Cowboy, their first explicitly conceptual effort since Tumbleweed Connection. It’s no coincidence that it’s their best album since then, showcasing each at the peak of his power, as John crafts supple, elastic, versatile pop and Taupin’s inscrutable wordplay is evocative, even moving. What’s best about the record is that it works best of a piece — although it entered the charts at number one, this only had one huge hit in “Someone Saved My Life Tonight,” which sounds even better here, since it tidily fits into the musical and lyrical themes. And although the musical skill on display here is dazzling, as it bounces between country and hard rock within the same song, this is certainly a grower. The album needs time to reveal its treasures, but once it does, it rivals Tumbleweed in terms of sheer consistency and eclipses it in scope, capturing John and Taupin at a pinnacle. They collapsed in hubris and excess not long afterward — Rock of the Westies, which followed just months later is as scattered as this is focused — but this remains a testament to the strengths of their creative partnership.