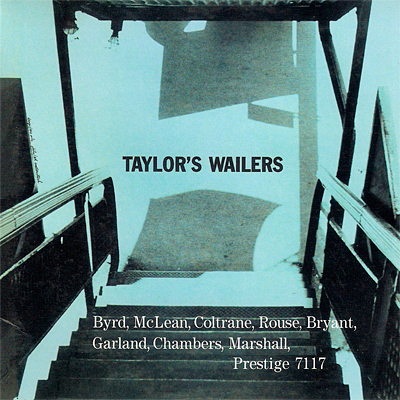 Taylor’s Wailers is the debut album by drummer Art Taylor, released in 1957 on Prestige. It features tracks recorded mainly on February 25, 1957 plus a track from a different session featuring John Coltrane.

Five of the six selections on this reissue feature drummer Art Taylor in an all-star sextet of mostly young players comprised of trumpeter Donald Byrd, altoist Jackie McLean, Charlie Rouse on tenor, pianist Ray Bryant, and bassist Wendell Marshall. Among the highpoints of the 1957 hard bop date are the original version of Bryant’s popular “Cubano Chant” and strong renditions of two Thelonious Monk tunes (“Off Minor” and “Well, You Needn’t”) cut just prior to the pianist/composer’s discovery by the jazz public. Bryant is the most mature of the soloists, but the three horn players were already starting to develop their own highly individual sounds. The remaining track (a version of Jimmy Heath’s “C.T.A.”) is played by the quartet of Taylor, tenor saxophonist John Coltrane, pianist Red Garland, and bassist Paul Chambers and is a leftover (although a good one) from another session.

Produced by Bob Weinstock. Engineered by Rudy Van Gelder.
Recorded on February 25, 1957, except track “2” on March 22, 1957 at Van Gelder Studio, Hackensack, NJ.
Mastered for this reissue by Kevin Gray at Cohearent Audio.