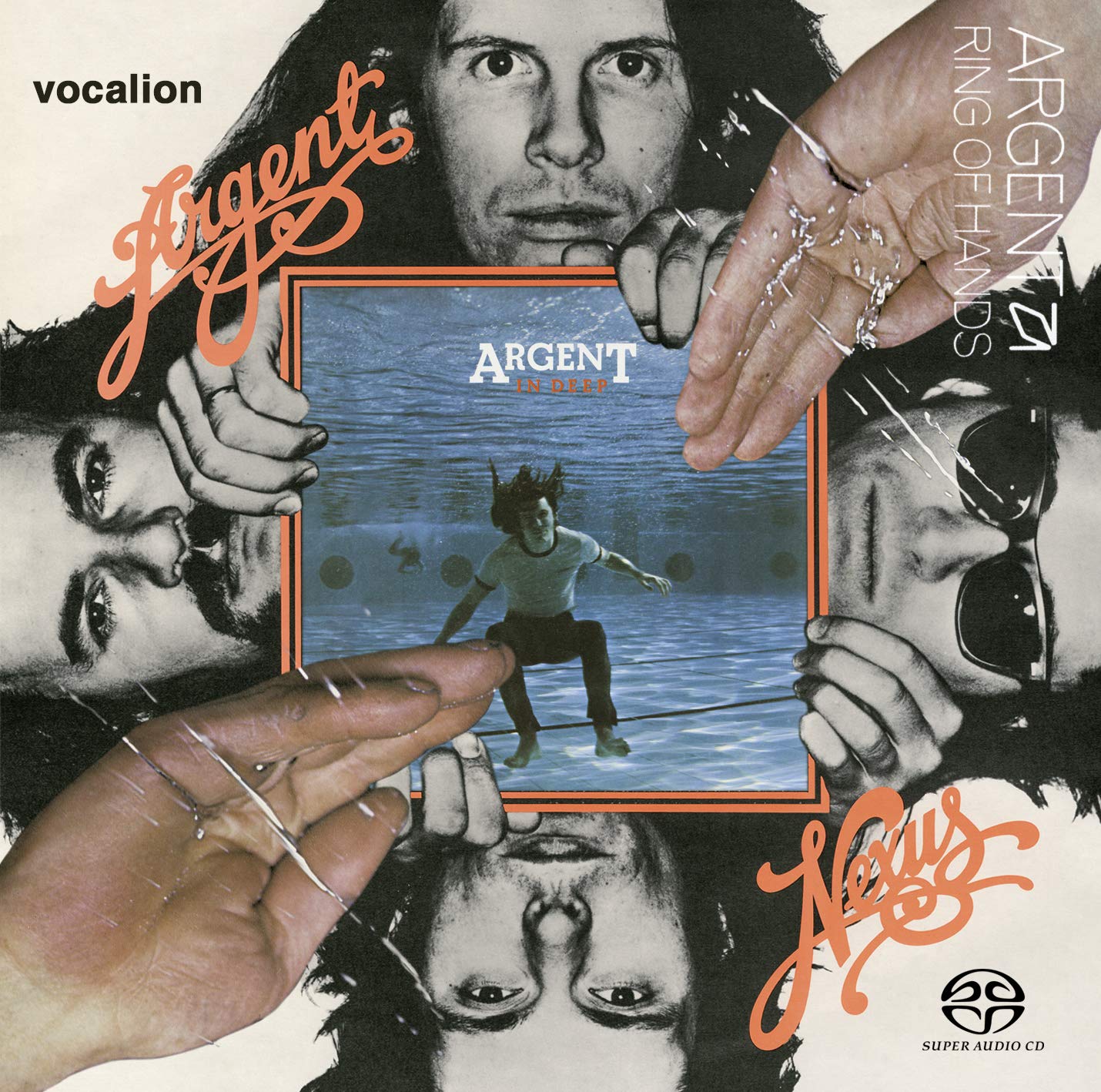 When the Zombies disbanded in 1969, their keyboardist and songwriter Rod Argent formed the band “Argent,” incorporating jazz, classical, and art rock influences. The other members included guitarist and songwriter Russ Ballard, bassist Jim Rodford, and drummer Bob Henrit. Their earliest releases received a fair amount of critical acclaim, but the real breakthrough came later on with their album “In Deep” with their minor hit “God Gave Rock ‘N’ Roll to You”. For those in the know you are well aware that Dutton Vocallion has been masterfully re-issuing classics like this over the past few years. Argent is part of a new batch of reissues that contain a double SACD set that contains three of their mid-career albums: “Ring of Hands”, “In Deep”, and “Nexus”.

In Deep
Rod Argent formed Argent in 1969, following the breakup of the Zombies. The lineup consisted of his cousin Jim Rodford and former Roulettes members Russ Ballard and Bob Henrit. The debut album, Argent, was very much in the same style as the Zombies, but subsequent albums veered more toward a heavier, progressive sound. In Deep, the band’s fourth album, was originally released on Epic Records in 1973. While not as strong as its predecessors, it did produce the excellent single (and one of the best tracks on the album), “God Gave Rock and Roll to You,” which made the Top 20 in England and charted well in North America. The original album contained eight songs, with half written by Ballard and the other half by Argent and White. This Collectables reissue contains the bonus track “Hold Your Head Up,” originally from the band’s third album. When the band split in 1976, Argent went on to pursue a solo career. Henrit opened a drum shop in London’s West End and played in a band called Phoenix with Rodford, before they both joined the Kinks.

Nexus
1974 album from the British rockers led by former Zombies keyboardist and songwriter Rod Argent. The band steered away from his former outfit’s commercial pop leanings and added more Classical, Jazz, and Art Rock influences in accordance with Argent’s musical training. In other words: “Another rock album bent more towards the progressive area, however whilst there are some good tracks on here there are some tracks which sound a bit confused and disjointed and seemed to lose their direction. As usual the production and playing is of a good standard but overall its not as good as band’s previous offerings”.

Ring Of Hands
Ring of Hands is, more often than not, overshadowed by the albums that surrounded it. Argent’s debut included Russ Ballard’s “Liar,” and 1972’s All Together Now was the album that yielded their Top Five hit “Hold Your Head Up,” while 1973’s In Deep produced “God Gave Rock ‘N’ Roll to You,” which became a bigger hit for Kiss in 1992. But Ring of Hands is one of Argent’s most progressively oriented albums, with most of its energy and dynamics coming from Rod Argent’s keyboard playing. This album shines the spotlight a little brighter on Rod Argent than on Ballard, and its weight lies more on the band’s ability to produce some impressive progressive rock than to create lyrically based rock & roll. Argent himself is spectacular throughout most of the album, lending his lone, rich keyboard solos to tracks like “Lothlorien,” “Cast Your Spell Uranus,” and “Sleep Won’t Help Me.” The album does wander into pop familiarity from time to time, but only mildly, like on “Chained” or “Where Are We Going Wrong,” and, even so, Rod Argent’s playing appropriately protrudes through most of songs to give Ring of Hands an independent feel from all of the albums that followed. In 1999, Sony’s Collectables reissued the album with a bonus track; Rod Argent’s “He’s a Dynamo,” which was written one year after the release of the original Ring of Hands album.