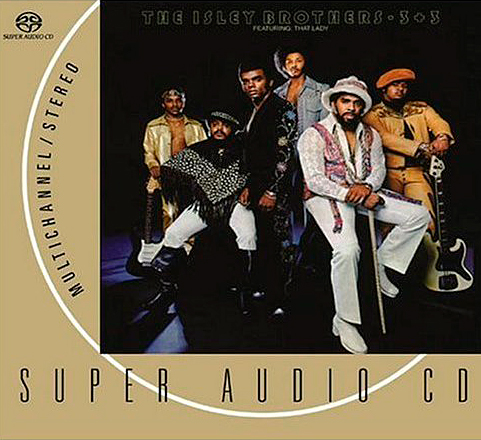 As influential in its own way as early ’70s efforts by Sly and the Family Stone, Stevie Wonder, Curtis Mayfield, and Marvin Gaye, the Isley Brothers’ 3+3 took black music to the next level. Combining frontline vocalists O’Kelly, Ronald, and Rudolph with the instrumental chops of younger brothers Ernie and Marvin, plus brother-in-law Chris Jasper, the group broke out with the smoking single “That Lady,” featuring Ernie’s Hendrixian guitar. They followed it up with some soulful reworkings of rock songs of the moment (which, as luck would have it, all turned into certified classics), including the Doobie Brothers’ “Listen to the Music,” Seals and Crofts’s “Summer Breeze,” and James Taylor’s “Don’t Let Me Be Lonely Tonight.” It’s hard to imagine now how daring a strategy that was at the time, but the results sounds as fine today as ever.

Recorded in 1973, 3 + 3 was a major turning point for the Isley Brothers. With this album, the Isleys moved their T-Neck label from Buddah to Epic/CBS (which became Epic/Sony in the early ’90s), and it was at Epic that they unveiled their new lineup. Lead singer Ronald Isley and his siblings O’Kelly and Rudolph remained, but the Isleys became a sextet instead of a trio when cousin Chris Jasper and younger brothers Ernie and Marvin were added. This new lineup was called 3 + 3, and the addition of Jasper on keyboards, Ernie on guitar, and Marvin on bass added exciting new elements to the Isleys’ sound. One of finest R&B bassists of the 1970s, the ever-so-funky Marvin is in a class with heavyweights like Larry Graham and Louis Johnson – and Ernie is a stunning guitarist who is heavily influenced by Jimi Hendrix but has a distinctive style of his own. the Isleys had always been lovers of rock, but with the addition of Ernie, their sound became even more overtly rock-influenced. Nonetheless, the rock and pop elements didn’t alienate R&B audiences, which ate this album up. The single “That Lady” (which is based on an Impressions-like gem they had recorded in 1964) was a major hit, and the Isleys are equally captivating on soul interpretations of Seals & Crofts’ “Summer Breeze,” James Taylor’s “Don’t Let Me Be Lonely Tonight,” and the Doobie Brothers’ “Listen to the Music.” With this superb album, the Isley Brothers sounded better than ever – and they gained a lot of new fans without sacrificing the old ones.

The 5.1 mix has been remastered and adapted from the original quadraphonic analogue tapes, respecting and maintaining the original surround imaging.