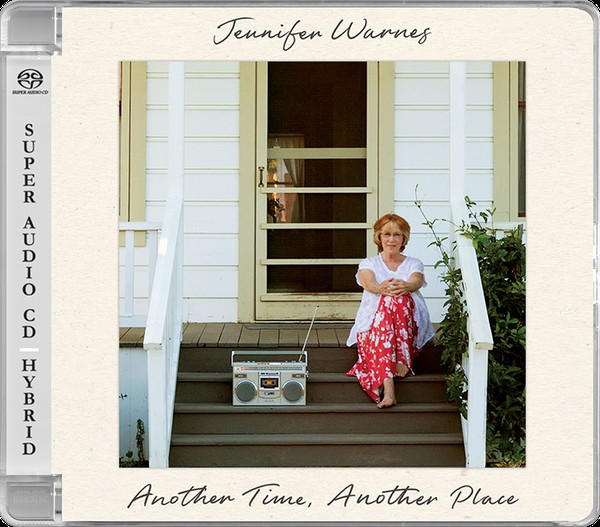 One of the most-loved singers of our time has returned with a modern-day masterpiece. Jennifer Warnes is back with a brand-new album called Another Time, Another Place, on BMG. The new album reunites Warnes with her co-producer and great friend and collaborator Roscoe Beck, the long-time musical director and bass player for Leonard Cohen. It’s the same partnership that made the landmark 1987 album Famous Blue Raincoat. Jennifer Warnes has always been known as someone who makes beautifully crafted records with an open heart, unafraid to show emotion and love through her work. It’s the perfect time for Another Time, Another Place.

Singer/songwriter Jennifer Warnes celebrates her 50th anniversary as a recording artist with Another Time, Another Place, her first recording since 2001’s The Well. Since the 1990s, Warnes has worked only when she’s wanted to – a decade passed between The Well and its predecessor, The Hunter. In this century, she has lent her voice to recordings by Sonny Landreth, Chris Hillman, Leonard Cohen, and his son Adam Cohen. Warnes and longtime collaborator Roscoe Beck (Cohen’s bassist and music director and her own producer on Famous Blue Raincoat and The Hunter), began working in Austin and Los Angeles in 2015. But a string of profound losses – a niece, two sisters, a longtime manager, ex-boyfriend, her dog and Cohen – sidetracked the sessions several times.

Aside from or perhaps because of all that tragedy, Another Time, Another Place offers a stellar reflection of Warnes the interpretive singer. She co-wrote only one tune here, the lilting, Americana road song “The Boys and Me” with Michael Smotherman. The rest are covers that range from country to jazz to pop, all delivered with her sensual, expressive contralto. She opens with a completely revisioned version of Pearl Jam’s “Just Breathe.” Amid a weave of strings, upright bass, acoustic and electric guitars, and poignantly played B-3 and French horn, she offers the song’s melody with bittersweet knowledge and its projective lyric as if singing into a mirror for reassurance. A breezy and bluesy read of the jazz standard “Tomorrow Night” – cut by everyone from Lonnie Johnson to Bob Dylan to the Texas Hill Country’s own Johnny Nicholas – features Beck’s strolling upright bassline atop drums (Vinnie Colaiuta), percussion (Lenny Castro), and Jim Cox’s subtly swelling Hammond as she leans hard into the tune’s elegant swing. Mickey Newbury’s “So Sad” is delivered with warm, rounded edges as Greg Leisz’s pedal steel winds around the grain in her smoky vocal to underscore each moment of loneliness and pain in the wake of a lover’s departure, and those of friends who’ve shuffled off this mortal coil. Warnes convincingly weds jazz, cabaret, and musette in her version of “I See Your Face Before Me.” Landreth appears on resonator and electric slide guitar on a swampy yet altogether cinematic take on Ray Bonneville’s “I Am the Big Easy,” complete with a laid-back second-line rhythm. Two tracks later she offers “Back Where I Started,” another country-esque soul number by the Tedeschi-Trucks Band. The tension between emotional conviction and sweetness in its lyric is a perfect match for Warnes’ unflinching honesty and vulnerability. While Marcus Hummon’s “Freedom” wasn’t written for Warnes, it could have been. Backed by an all-star choir that numbers Ruthie Foster and Blondie Chaplin in its quintet, it relays the notion of freedom as both a state of abundance and an illustration of loss. As a result of these intimate performances, Another Time, Another Place is return to the world after a prolonged period of solitude and grief. Warnes offers these songs with the same aplomb, grace, discipline, passion, and dignity that she has displayed her entire career, and imbues these songs with new shades of meaning in the process.