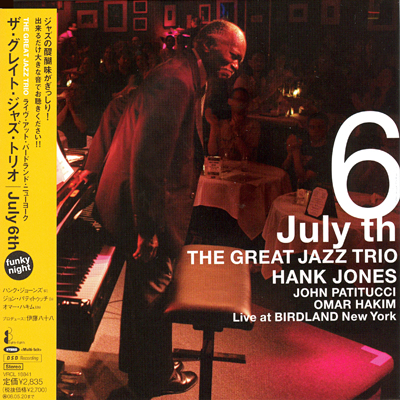 At age 89, Hank Jones is playing as well as any point in his long, celebrated career. He is still constantly challenging himself, teaming up with younger musicians, performing and recording new materials. This disc, simply titled July 6th, is the second part of the Great Jazz Trio, contains more tunes that Jones had never recorded before.

Long-traveled jazz juggernaut led by pianist Hank Jones. His Great Jazz Trio, which was born in 1975 with Tony Williams and Ron Carter, has undergone numerous personnel changes, and the latest, 21st century iteration includes John Patitucci and Omar Hakim. Hakim is generally known as a fusion/contemporary drummer, but unexpected chemical reaction of seemingly incompatible elements has been the hallmark of the Great Jazz Trio from its beginning.

On this release, recorded in 24-channel pure DSD with a mobile recording unit and mixed and mastered in Tokyo at Sony Studios, Hank Jones’ piano playing is elegant, fresh and inventive. Patitucci aids with superb musicality, and Hakim with impeccable comping and explosive solos.