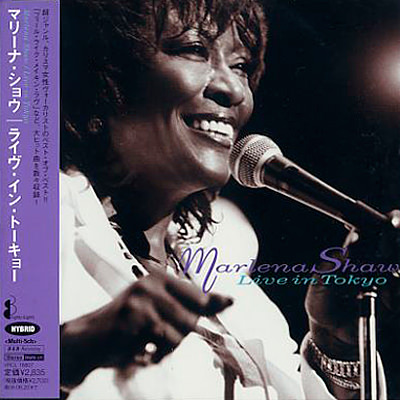 Marlena Shaw is a jazz singer who just never gets her commercial rewards. Her delivery is musically unique, emotionally engaging and quite oftne humorous. She’s a true jazz singer and this live set captures most of it.

There are vocalists who can sing well, and swing too; and then there are seasoned professionals who master any material, making each song sound like a fresh thought and an intimate conversation. Marlena Shaw, who began with Count Basie and still works steadily and internationally all through the year, has each of these elements, plus a stage presence that manages to be both electrifying and endearing. This live release, recorded at Tokyo’s B Flat club in June 2002, and reissued about a year later by 441 Records, supplies a taste of Shaw’s warm, easy rapport with her audience, and their delighted response. What is fully documented is her splendid voice and range, and her relaxed, personal delivery of the material. Here it moves from her own, finger-snapping “Ooh Wee – You’re the One for Me,” to a slow-burning rendition of “What a Difference a Day Makes.” Shaw recalls her Basie days with “Until I Met You,” aka “Corner Pocket,” and heats up both “Round Midnight” and “Feel Like Makin’ Love,” which was a hit for Roberta Flack in a more subdued version. Whether interpreting jazz classics or pop tunes, Shaw puts her signature on each track, inviting the listener in with her direct, earthy approach, and her unique lyrical improvisations that enhance the meaning of each song. This CD is strong, honest, tuneful, and recommended.