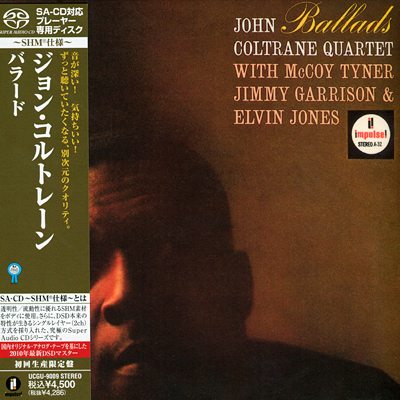 Throughout John Coltrane’s discography there are a handful of decisive and controversial albums that split his listening camp into factions. Generally, these occur in his later-period works such as Om and Ascension, which push into some pretty heady blowing. As a contrast, Ballads is often criticized as too easy and as too much of a compromise between Coltrane and Impulse! (the two had just entered into the first year of label representation). Seen as an answer to critics who found his work complicated with too many notes and too thin a concept, Ballads has even been accused of being a record that Coltrane didn’t want to make. These conspiracy theories (and there are more) really just get in the way of enjoying a perfectly fine album of Coltrane doing what he always did — exploring new avenues and modes in an inexhaustible search for personal and artistic enlightenment. With Ballads he looks into the warmer side of things, a path he would take with both Johnny Hartman (on John Coltrane & Johnny Hartman) and with Duke Ellington (on Duke Ellington and John Coltrane). Here he lays out for McCoy Tyner mostly, and the results positively shimmer at times. He’s not aggressive, and he’s not outwardly. Instead he’s introspective and at times even predictable, but that is precisely Ballads’ draw.