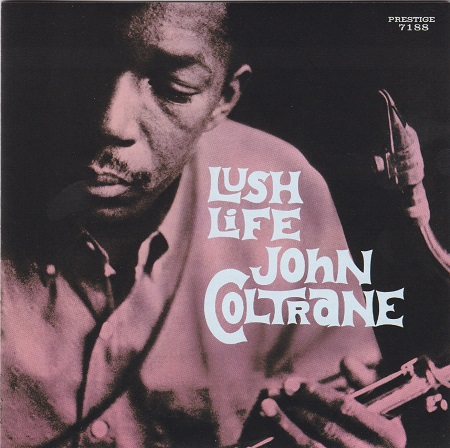 When he recorded Lush Life, John Coltrane was rapidly gaining recognition for his innovations in jazz soloing. As a member of the Miles Davis Quintet, he had become known far beyond a small circle of jazz insiders. Coltrane’s development as a soloist came at a pace and an intensity seldom witnessed in jazz. It was immeasurably aided by two factors: He jettisoned his drug and alcohol habits and, during a hiatus from the Davis band, he worked with Thelonious Monk. The boldness and daring that began to characterize Coltrane’s playing during the Monk period are evident here in three pieces on which he is accompanied only by bass and drums. Freeing his astonishing creativity from the imposed harmonies of a piano, he employs his massive technique to put into standard song and blues forms nearly all that they could contain. In two pieces with pianist Red Garland, his colleague from the Davis group, Coltrane is scarcely less inventive. The clarity and definition of SA-CD technology make the intimacy of Coltrane’s style seem even more conversational.

Lush Life (1958) is among John Coltrane’s best endeavors on the Prestige label. One reason can easily be attributed to the interesting personnel and the subsequent lack of a keyboard player for the August 16, 1957 session that yielded the majority of the material. Coltrane (tenor sax) had to essentially lead the compact trio of himself, Earl May (bass), and Art Taylor (drums). The intimate setting is perfect for ballads such as the opener “Like Someone in Love.” Coltrane doesn’t have to supplement the frequent redundancy inherent in pianists, so he has plenty of room to express himself through simple and ornate passages. Unifying the slippery syncopation and slightly Eastern feel of “I Love You” is the tenor’s prevalent capacity for flawless, if not downright inspired on-the-spot “head” arrangements that emerge singular and clear, never sounding preconceived. Even at an accelerated pace, the rhythm section ably prods the backbeat without interfering. A careful comparison will reveal that “Trane’s Slo Blues” is actually a fairly evident derivation (or possibly a different take) of “Slowtrane.” But don’t let the title fool you as the mid-tempo blues is undergirded by a lightheartedness. May provides a platform for Coltrane’s even keeled runs before the tenor drops out, allowing both May and then Taylor a chance to shine. The fun cat-and-mouse-like antics continue as Taylor can be heard encouraging the tenor player to raise the stakes and the tempo — which he does to great effect.

The practically quarter-hour reading of Billy Strayhorn’s “Lush Life” is not only the focal point of this album, it is rightfully considered as one of Coltrane’s unqualified masterworks. The performance hails from January 10, 1958 as Coltrane sits in with Red Garland (piano), Donald Byrd (trumpet), Paul Chambers (bass), and Louis Hayes (drums). Coltrane handles the tune’s delicate complexities with infinite style and finesse. Garland similarly sparkles at the 88s, while Byrd’s solo offers a bit of a tonal alternative. It should be noted that the reading here does not include a vocal from Johnny Hartman. That version can be found on the ever imaginatively monikered John Coltrane & Johnny Hartman (1963).