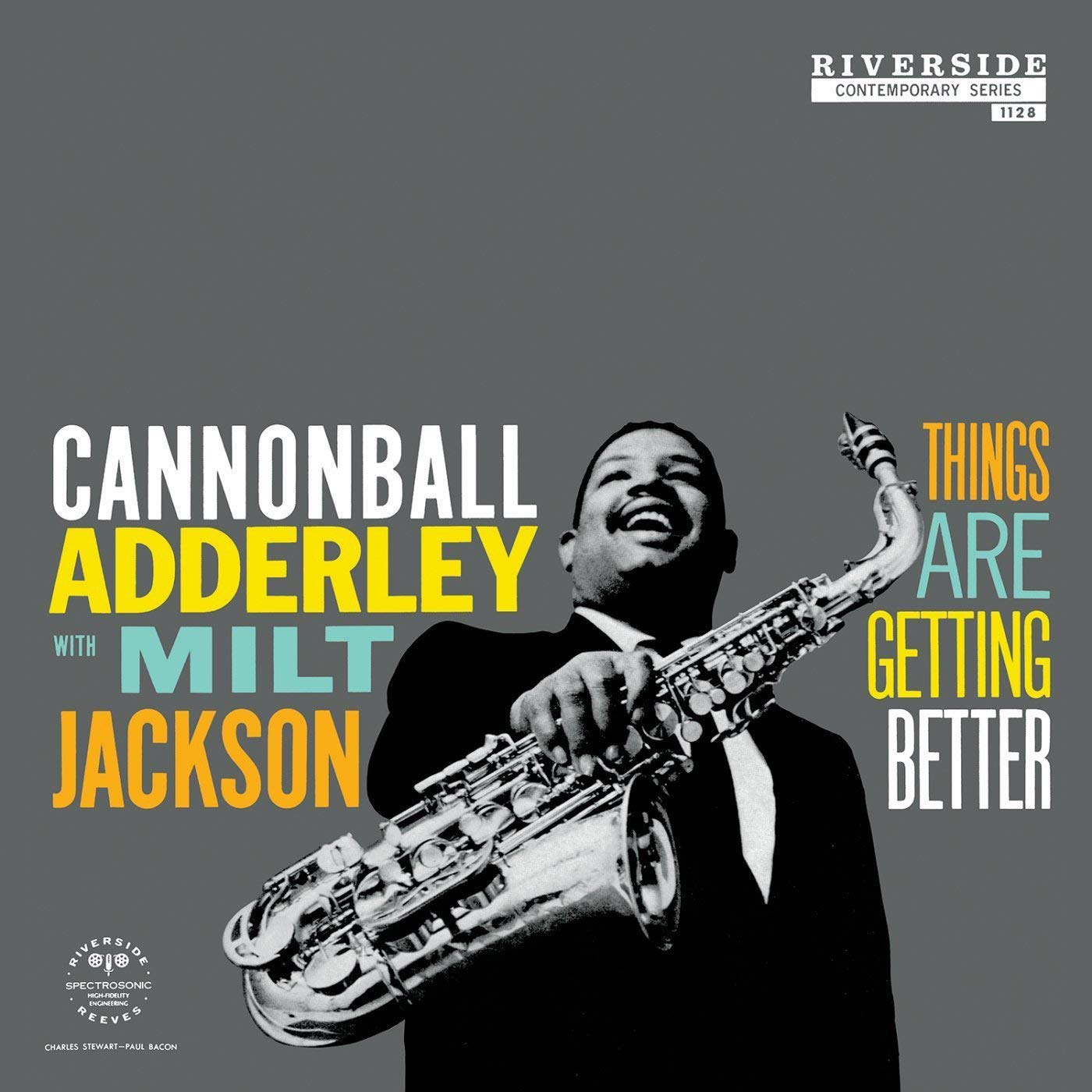 From the moment he exploded from Florida onto the New York scene in 1955, Cannonball Adderley was accepted by musicians, critics and listeners as a welcome arrival. By the time he and Milt Jackson teamed up for Things Are Getting Better, Adderley was becoming a major figure, due in part to his membership in the Miles Davis Sextet, but primarily because of the expansive joyousness of his playing. Jackson’s role in modern jazz went back to the early days of bebop when Dizzy Gillespie sent for him in 1945 to come from Detroit and join his sextet. Adderley and Jackson had in common superb skills in all aspects of music, a broad understanding and deep appreciation of jazz history and styles, and the earthiness bred by immersion in the blues. With the superlative rhythm section of Wynton Kelly, Percy Heath and Art Blakey, they produced one of the most exhilarating albums of the 20th century.

This title provides ample evidence why alto Cannonball Adderley is considered one of the masters of his craft. Here he joins forces with Modern Jazz Quartet co-founder Milt Jackson on vibes to create a variety of sonic atmospheres. They are backed by the all-star ensemble of Wynton Kelly on piano, Percy Heath on bass, and the one and only Art Blakey on drums. The moody “Blues Oriental” opens the set with Jackson immediately diving in with his trademark fluid runs and shimmering intonation. Adderley counters with a light and lively line that weaves between the rhythm section. The optimistic “Things Are Getting Better” is a good-natured romp as the co-leads trade and cajole each other into some downright rollicking exchanges. This directly contrasts with the sultry “Serves Me Right,” which allows the combo members to demonstrate their collective musical malleability. The interaction between Adderley and Jackson sparkles as they entwine their respective playing with an uncanny singularity of spirit. The cover of Dizzy Gillespie’s “Groovin’ High” contains another spirited performance with some thoroughly engaging improvisation, especially during Adderley’s voracious solos. “Sidewalks of New York” bops freely as Jackson unleashes some sublime licks against a hearty and equally boisterous sax. Adderley’s “Sounds for Sid” demonstrates his uncanny ability to swing with a strong R&B vibe. With drop-dead timing and profound instrumental chops, this cut is undoubtedly one of the best from Adderley’s earliest canon. The album concludes with a jumping reading of Cole Porter’s “Just One of Those Things.” While Wynton Kelly has been uniformly solid, his interjections stand out here as he bridges and undergirds the two as they banter with flair and aplomb. This set can be recommended without hesitation to all manner of jazz enthusiast, as it quite literally offers something for every taste. This SACD reissue includes two bonus tracks supplementing the original seven-song running order, alternate takes of “Serves Me Right” and “Sidewalks of New York”.